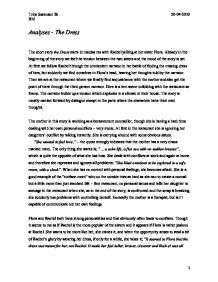 The short story the Dress starts in medias res with Rachel yelling at her sister Flora. Already in the beginning of the story we feel the tension between the two sisters and the mood of the story is set. At first we follow Rachel through the omniscient narrator in her battle of finding the missing dress of hers, but suddenly we find ourselves in Flora’s head, hearing her thoughts told by the narrator. Then we are at the restaurant where we finally find acquaintance with the mother and also get the point of view through the third-person narrator. Here is a tent scene unfolding with the restaurant as frame. The narrator builds up a tension which explodes in a climax in their house. The story is mostly carried forward by dialogue except in the parts where the characters have their own thoughts.

The mother in this story is working as a bereavement counsellor, though she is having a hard time dealing with her own personal conflicts – very ironic. At first in the restaurant she is ignoring her daughters’ conflict by talking instantly. She is carrying around with some obvious issues.

“She wanted to feel love,” – the quote strongly indicates that the mother has a very chaos marked mind. The only thing she wants is; “… a calm life, a flat sea with no sudden breezes”, which is quite the opposite of what she has how. She deals with conflicts at work and again at home and therefore she represses and ignores all problems: “She liked emotions to be explored in a safe room, with a clock”. When she has no control with personal feelings, she becomes afraid. She is a good example of the “surface-mom” who on the outside tries as hard as she can to create a normal but a little more than just standard life – fine restaurant, no personal issues and tells her daughter to assuage in the restaurant when she, as in the end of the story, is confronted and the scrap is breaking she suddenly has problems with controlling herself. Ironically the mother is a therapist, but isn’t capable of communicate out her own feelings.

Flora and Rachel both have strong personalities and that obviously often leads to conflicts. Though it seems to me as if Rachel is the more popular of the sisters and it appears if Flora is rather jealous at Rachel. She wants to be more like her, she craves it, and when the opportunity arises to steal a bit of Rachel’s glory by wearing her dress, if only for a while, she takes it; “
It seemed to Flora that the dress was meant for her, not Rachel. It made her feel taller, braver, cleverer and Rachel was all those things already.”

Flora probably has a identity problem which is a common teenage problem, and by taking on this dress, she takes over Rachel’s – or someone else’s – personality and becomes more confident by wearing it.

In the story we come across various symbols. The first one appears in the beginning of the story. When Rachel enters Flora’s room we are presented to her mind of chaos: “Crumpled, discarded clothes, empty cigarette packets, broken lighters, dried-out mascara brushes and lidless lipstick” This symbolizes her absented, impulsive mind.

The other birthday party in the restaurant symbolizes the life that the mother never will achieve with her two combating daughters.

Finally the dress symbolizes Rachel’s identity, the identity which her sister Flora so desperately craves for: the beauty, the strength and the courage. In the end the buried dress symbolizes the bad communication in the family. It is only buried because of the as a result of the lack of communication and no mutual understanding - this is one of the main themes that the story revolves which are important components in understanding the postmodernism.