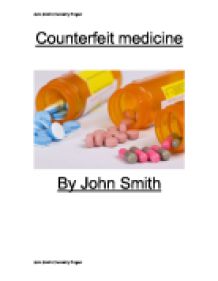 The Global Problem of Counterfeit Medicine

Counterfeit medicine By John Smith Counterfeit medicine by John Smith What is medicine? Medicines are chemicals or compounds made to cure, prevent or stop disease and relief symptoms or diagnose certain illnesses. Medicines are ultimately used to save lives, not just in humans but also in other life forms. Different types of medicines and how their made? Medicines come from a range of sources; they come from our biosphere in nature in places such as the Amazon rainforest. For example, the Curare plant is a large poisonous vine rich in alkaloids. The alkaloids relax muscles and are used as an arrow poison. In South America, it is used to treat bruises, fever, edema, and kidney stones. Other medicines are produced in laboratories by incorporating together a number of chemicals. In other cases such as penicillin; they are a derivative of organisms such as fungus. A few medicines are even biologically engineered by inserting genes into bacteria that make them produce the desired substance. Ways on how to take medicine * Liquids that are swallowed (like cough syrup) * Drops that are put into ears or eyes * Creams, gels, or ointments that are rubbed onto the skin * Inhalers (like nasal sprays or asthma inhalers) ...read more.

and require particular knowledge and expertise, which takes many years to acquire. To achieve this would require a strict governmental will, backed by its people to institute a sturdy national drug regulatory squad. Lack of appropriate drug legislation Regulations and legislations form the main pillars of drug regulation. Legislation means; the law which has been circulated by a legislature or other governing body (or the process of making it). If there is no legislation and regulations there are no direct rules that monitor medicines, therefore if a crime is committed in terms of counterfeiting drugs it is not recognised. The World Health Organisation or the WHO have members who follow their drug rules and regulations however only a few member have enacted special national legislation addressing the issue of counterfeit drugs. In addition to this, the punishments and sanctions to counterfeiters are so weak that in most cases this is no deterrent. Absence of or weak drug regulation Drugs have to be effective and of fine quality whilst being safe to produce the correct effects. To ensure these effects, requires the creation of ? knowledgeable national drug regulatory authority with the required workers and other resources to organise the manufacture, importation, distribution and sale of medicines. ...read more.

Lack of regulation by exporting countries and within free trade zones Medicines made to sell overseas are not looked out for by numerous exporting countries to the identical criterion as those formed for household use. To add to that, pharmaceuticals (also referred to as medicine, medication or medicament) are from time to time exported through free trade zones where drug management is negligent and where repackaging and re-labelling occurs. Trade understanding like the above can provide better chances for counterfeiters to introduce illegal substances into the allocating chains even when the system is highly regulated. Trade through several intermediaries Trade in medicines hardly ever takes place among the manufacturing country and the importing country. At this moment time, it takes place from one side to another side via more intermediate countries or operating or also known as trading houses. In trading houses they may sometimes engage repackaging and re-labelling which may be carried out without any controls under conditions that do not act in accordance with with good manufacturing practices' requirements. What to do, if you have purchased a counterfeit drug? If you believe you have counterfeited drugs keep the drug, packaging and receipt then contact a company called the; Food and Drugs Administration or the FDA which can be contacted by calling 1-800-FDA-1088 (1-800-332-1088) or online at www.fda.gov/medwatch. ...read more.

****
There is a good structure and some evidence of research but the whole piece lacks evaluation. It is possible to argue that some counterfeit drugs perform a valuable service in certain circumstances but it has not been put forward at all. I would like to see much more discussion of the drug manufacturers profits and the moral case for counterfeiting drugs.