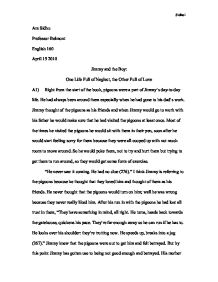 Am Sidhu Professor Belmont English 160 April 19 2010 Jimmy and the Boy: One Life Full of Neglect, the Other Full of Love A1) Right from the start of the book, pigoons were a part of Jimmy's day-to-day life. He had always been around them especially when he had gone to his dad's work. Jimmy thought of the pigoons as his friends and when Jimmy would go to work with his father he would make sure that he had visited the pigoons at least once. Most of the times he visited the pigoons he would sit with them in their pen, soon after he would start feeling sorry for them because they were all cooped up with not much room to move around. So he would poke them, not to try and hurt them but trying to get them to run around, so they would get some form of exercise. "He never saw it coming. He had no clue (276)." I think Jimmy is referring to the pigoons because he thought that they loved him and thought of them as his friends. He never thought that the pigoons would turn on him; well he was wrong because they never really liked him. After his run in with the pigoons he had lost all trust in them, "They have something in mind, all right. He turns, heads back towards the gatehouse, quickens his pace. They're far enough away so he can run if he has to. ...read more.

Throughout "The Road," "the man" shows various examples of this. Giving the boy more food then he gives himself and making sure the boy is covered up enough so he doesn't freeze to death, this all before he worries about covering himself up. He also does some things the boy wants that could have been potentially detrimental to their survival such as not killing the dog when it is obvious that they need the food. "He looked down at the boy. Shivering in his coats. He bent over and kissed him on the gritty brow. We won't hurt the dog, he said. I promise (82)." Also, "the man" helps out others, giving them food, when they barely have enough for themselves, but that's what "the boy" wants and "the man" no matter how unhappy, usually obliges. Another thing that "The Road" teaches the reader about being a parent, is that a parent needs to be both the teacher and the student. "The man" in "The Road," especially has to be the teacher in the circumstances they find themselves in. "The boy" only knows the world they live in now and not the world he was conceived in. Also, "the man" is his only companion, so "the man" has to take on many different roles. He does things he wouldn't otherwise have to do such as being the teacher, the friend, the mentor, and the guardian. "The boy" is thirsty for knowledge and it's easy to tell in the story that he's very curious about the world that use to be. ...read more.

A dark desolate world, how could anyone not be hopeful that they find a better place? Also, they are in such a state that if they can get through each day, not many of us have to worry about getting through our day-to-day lives while facing our everyday problems. The book makes our problems insignificant and easy to overcome and to deal with. Although, "the man" stays hopeful throughout the book, he knows not to hope for things that just can't be. For example, "he knew that he was placing hopes where he'd no reason to. He hoped it would be brighter where for all he knew the world grew darker daily (213)." Here "the man" is talking about going to the coast in hopes to find a better place, but he realizes that it's not really worth getting his hopes up for because the coast is potentially going to look just like, or maybe even worse than, everywhere they have been. Another way this book is hopeful is thinking that if more and more read this they may have an idea what the world may look like if we continue to treat it and abuse it the way we have been. If they realize that our actions are the main cause of our world potentially looking like that, I really think they would rethink some of the choices they make when it comes to the environment. It may be hopeful thinking to believe that this book could have such an impact, but I believe that might be one of the points to "The Road. ...read more.