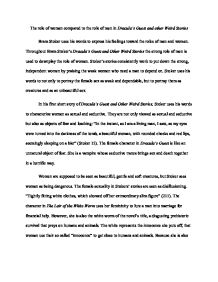 The role of women compared to the role of men in Dracula's Guest and other Weird Stories Bram Stoker uses his words to express his feelings toward the roles of men and women. Throughout Bram Stoker's Dracula's Guest and Other Weird Stories the strong role of men is used to downplay the role of women. Stoker's stories consistently work to put down the strong, independent women by praising the weak women who need a man to depend on. Stoker uses his words to not only to portray the female s*x as weak and dependable, but to portray them as creatures and as an unbeautiful s*x. In his first short story of Dracula's Guest and Other Weird Stories, Stoker uses his words to characterize women as s****l and seductive. They are not only viewed as s****l and seductive but also as objects of fear and loathing: "In the instant, as I am a living man, I saw, as my eyes were turned into the darkness of the tomb, a beautiful woman, with rounded cheeks and red lips, seemingly sleeping on a bier" (Stoker 12). The female character in Dracula's Guest is like an unnatural object of fear. She is a vampire whose seductive trance brings s*x and death together in a horrific way. ...read more.

Women are viewed as cursed because they get nervous easily, unlike men. By women being viewed as weak they are also viewed as fearful: He sprang forward, but too late to catch her as she fell fainting on the floor ... After a little while Mary recovered from her swoon, but only to fall into strong hysterics, in which she laughed and wept and raved and cried, 'Keep him from me,' ... and many other words of entreaty and of fear. (69) The female character falling to the floor shows that she is weak. The female crying and being fearful only makes all females look as if they are as weak as she. Stoker does not only put down the stronger women to praise the weaker ones. He also puts down the stronger women to make the men seem as if they are the strong ones: "Joshua draw his thumb across the edge of his knife in an unconscious sort of way. At the action Mary turned pale and almost fainted" (71). The male character touching the knife with no thought or fear shows that he is stronger and not fearful. The woman character turning pale and almost fainting at the gesture the man is doing shows that she is weak and cannot handle what the man can handle. ...read more.

He does not understand women, he only cares about them looking as if they are weak and portraying them as unbeautiful creatures. The New Annotated Dracula by Bram Stoker and Leslie Klinger concludes: Each of Stokers' novels are all romances, depicting the traditional rituals of mating, the common conflicts, and the happy outcomes prevalent in the eighteenth-century novels of sentiment. On the whole, the heroines are beautiful but in need of rescue; the heroes are broad shouldered, noble of countenance and strong but lacking in their understanding of women. (Stoker and Klinger xl) Each of his stories have great characters, "traditional rituals of mating, common conflicts and ... happy outcomes." Stoker's stories are great because of this, but both he and the characters in his stories do not understand women, which is what they need. All of Stoker's works continue to put down the strong women. Not only do they put down women but, the role that they play. His works also put down their sexuality. Stoker continues to favor the male sexuality and the roles that the males play. In his novels, he makes sure to make the men seem as if they are strong and independent, unlike the women. Stoker does not appreciate the new women; he would rather see a dependent, weak woman in his novels. Bram Stoker is a brilliant writer, but that does not change the fact that he is a bit male chauvinistic. ?? ?? ?? ?? ...read more.