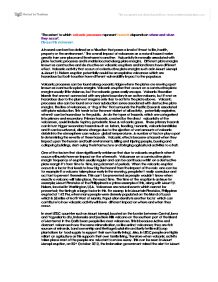 The extent to which volcanic processes represent hazards depends on where and when they occur.

'The extent to which volcanic processes represent hazards depends on where and when they occur'. Discuss this statement. A hazard can best be defined as a 'situation that poses a level of threat to life, health, property or the environment.' The overall impact of volcanoes as a natural hazard varies greatly from one place and timeframe to another. Vulcanicity is normally associated with plate tectonic processes and is mainly located along plate margins. Different plate margins known as constructive and destructive on volcanic eruptions and landforms have different effect. Volcanic activity that occurs at a destructive plate margins such as in Mount Merapi & Mount St. Helens eruption potentially could be an explosive volcanoes which are hazardous but both location have different vulnerability impact to the populace. Volcanic processes can be found along oceanic ridges where the plates are moving apart known as constructive plate margins. Volcanic eruption that occurs on a constructive plate margins usually little violence, but the volcanic gases easily escape. Volcanic Hawaiian Islands that are not connected with any plate boundary is an active volcano, but it's not as hazardous due to the plume of magma only rises to eat into the plate above. ...read more.

Volcanoes are natural events which cannot be prevented; the timing is a large factor in this. For example in Mountain Pinatubo, Philippines erupted at 1:42 PM, when many people were densely populated on the Island of Luzon which is 55 miles of North West of Manila. Population density is another factor which can contribute to how volcanic activity will have different impact on where and when they occur. In most LEDC countries such as Mount Merapi, located on the border between Central Java and Yogyakarta city, Indonesia and Soufriere Hills volcano on the southern part of the island of Montserrat in the Caribbean people live near volcanoes. This is because Active and dormant volcanoes have the same mineralisation, so like extinct volcanoes; they are rich sources of minerals, Land ownership and Heritage burial site and lastly fertile soil (crop plantations for food supply to support their own family living). Also, in LEDC people are highly reliant on agriculture as this supports their own family living, therefore when volcanic activity takes place most of the people are reluctant to move away. This can be seen in Mount Merapi eruption, on 25th October 2010, the Indonesian government raised the alert for Mount Merapi to its highest level (4) ...read more.

Pinatubo, 3 days before the eruption. This saw the evacuation of 58,000 people reducing the volcano's impact significantly. This shows that prediction technology such as seismographs exists near most tectonic margins and suggests that level of development is not an issue in the impact of volcanoes. But how countries manage preparation before the volcanic eruption occurs ay will show significantly differences of the impact and another factor that may help reduce the hazards from the volcanic processes is if people are educated about how dangerous is to stay near volcanic zones. Clearly where and when volcanoes eruption occurs represent its hazards through volcanic processes. It is the nature of the volcano which unleashes the level of the impact and causes the real devastation. If development had not taken place near to the volcano and the exclusion zone around the volcano had included a larger area then some of the effects from a volcano eruption may have been reduced with some of the deaths avoided. Also, management of preparation before a volcanic eruption, prediction technology such as seismographs and educating people about volcano hazard also plays an important role to how the effects aftermath and devastation of how volcano eruption can be reduced. ?? ?? ?? ?? ...read more.

A good answer to the question. At times it could link back the question more, and some structural issues need addressing. However the case study detail is very good.