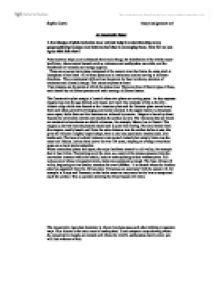 A knowledge of plate tectonics does not just help in understanding many geographical processes and features but also in managing them. How far do you agree with this view?

A2 Geography Essay A knowledge of plate tectonics does not just help in understanding many geographical processes and features but also in managing them. How far do you agree with this view? Plate tectonics helps us to understand three main things; the distribution of the worlds major landforms, where natural hazards such as volcanoes and earthquakes can strike, and the distribution of minerals and energy supplies. There are at seven main plates composed of the narrow crust that forms the outer shell or limosphere of the Earth. All of these plates are in continuous motion moving in different directions. This is continental drift and can be proven by fossil evidence, structure of continents and climatic change. This causes to plates to meet. Plate margins are the points at which the plates meet. There are three different types of these, each formed by a different process and each causing a different feature. The Constructive plate margin is located where two plates are moving apart. As they separate magma rises into the gap formed and creates new land. One example of this is the mid - Atlantic ridge which was formed as the American plate and the Eurasian plate moved away from each other, pulled by diverging convection currents in the upper mantle. ...read more.

Rebuilding of cities, businesses and lives takes years, and it is unknown that if when they finish the restoration, another earthquake might hit again. People still build settlements and take homes in areas of great danger, whether next to a volcano or on a high-risk earthquake area. This is because of the economic value of such a dangerous place; in time volcanic rocks produce highly fertile soil. This is extremely good for agriculture and brings the people an income. These areas often offer beautiful scenery; this has a great impact on tourism in an area. Many people still visit the yellow sand national park. Mineral wealth and geothermal energy is of great availability, for example hot water from geysers. The conservative plate margin that receives the most publicity and greatest scientific study is in California. The north American plate is almost completely still, however the pacific plate is moving in a north westwards direction by 10cm a year. The largest and best-known fault here is the San Andreas. In 1089 the Loma Prieta earthquake suffered a great loss of life. However California and areas like it, which have frequent earthquakes, have ideal climate, perfect soils and plenty of resources. ...read more.

Dust and ash in the atmosphere, intercepting the light from the sun was thought to reduce the global temperatures for 5 years. However, after all of this devastation, only 500 people died altogether. This was due to accurate forecasting which enabled the area for 15 miles to be evacuated. As magma rises up into and through the volcanic zone, there are warning signs, steam and the releases of gases, e.g. hydrogen sulphide. Technology is used to help the prediction, satellites can monitor heat changes, which is of great help to LEDC's that do not have the money to have ground monitoring stations. However earthquakes are harder to predict and the best people can do is prepare, which costs money. This is where LEDC's suffer more when they are hit by a natural disaster. They do not have the money to prepare sufficiently, and then do not have the money to restore afterwards. If we had no knowledge of how plate tectonics, how they work and what features they create, many more people would die when disasters strike, and the world would suffer more economically. By managing these, we cannot prevent an earthquake, volcanic eruption or tsunami from occurring, but we can predict when, and how badly they will occur. ?? ?? ?? ?? Sophie Curtis Essay assignment no1 ...read more.