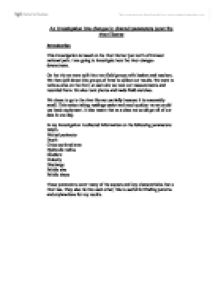 An investigation into changes in channel parameters down the river Horner

An investigation into changes in channel parameters down the river Horner Introduction This investigation is based on the river Horner just north of Exmoor national park. I am going to investigate how the river changes downstream. On the trip we were split into two field groups with leaders and teachers. We then split down into groups of three to collect our results. We went to various sites on the river, at each site we took our measurements and recorded them. We also took photos and made field sketches. We chose to go to the river Horner partially because it is reasonably small. This makes taking readings easier and much quicker as we could use basic equipment. It also meant that as a class we could get all of our data in one day. In my investigation I collected information on the following parameters: Width Wetted perimeter Depth Cross sectional area Hydraulic radius Gradient Velocity Discharge Pebble size Pebble shape These parameters cover many of the aspects and key characteristics that a river has. They also tie into each other; this is useful for finding patterns and explanations for my results. River basics Erosion Erosion is the breaking up of material. As the river moves through its course it changes from vertical to lateral erosion: There are four types of erosion > Hydraulic action - the river wears away the river bank from underneath. > Attrition - the rocks being carried by the river smash together and break into smaller particles. > Abrasion - the rocks carried along by the river wear down the river bed and banks. > Corrosion - the smaller particles are dissolved by the acidic river water. Stream order As a river develops its order of stream increases. This tells us how many tributaries have joined the river. A 2nd order stream has two tributaries, a 3rd order stream has four and a 4th order stream has 8 tributaries and so fourth. ...read more.

river is descending steeper the river erodes its bed more than its banks, this is the other way around when the river reaches a flatter part of its course (normally and in this case further downstream). When the erosion is more lateral, as I believe site 6 is, the river will get wider and not be as deep. This is evident in both the depth graph above and on the width graph on the previous page. In most rivers this changes is gradual and starts in the middle course of the river, according to my results the change happens much closer to the mouth (the lower course of the river) on the river Horner. I think this is because the river Horner is particularly small and comes of the hill right by the coast. From the map I can see that the land is steep until very close to the sea. As you can see from my map (introduction) there is a bigger distance gap between site 5 and 6 than between the other sites. So as I did not collect data between the sites I don't know how quickly these changes happened or where exactly they happened. The cross sectional area increase as the river develops towards its mouth. This is hardly surprising as both the average depth and width have increased (the CSA=average depth x width). I have already explained why these two parameters have increased. This graph shows me that the rivers efficiency in shifting water increases downstream. It shows me this because the hydraulic radius is a measure of river efficiency. I have already explained this in my methodology, just to clarify - a bigger hydraulic radius must have a bigger / equal amount of water touching a smaller area (wetted perimeter). The graph tells me that downstream the river discharge increases. Sites 1 and 2 are very small in comparison to the other sites. ...read more.

This means my data may not be totally representative of the river. If I were to repeat the experiment I would make sure to either measure all sites in a pool or all the sites in a rifle. An even more accurate way to do this would be to measure the river at each site in both a pool and a rifle and average the results to get the data. This is the main reason I used class data for most of my representation, so that it would balance out factors such as pools and riffles and the data should represent each site of the river. The other reading that I felt was inaccurate was the pebble shape. It was quite easy to judge the shape of the pebble incorrectly, when looking at six diagrams to try to identify which label to give to it. This reading was highly subjective and could be inaccurate. To improve this method I would. When measuring the width it wasn't always easy to determine the edge of the river due to large rocks and overhanging vegetation. To keep my results fair I always measured under vegetation as far as the water went. Vegetation and sediment caused the impeller to stop several times when measuring velocity. The impeller also needed a certain force to get going meaning that sometimes it wouldn't start for a long time. A solution to this could be to use a float and time it to get to a certain distance. Measuring the gradient was inaccurate at times as the person was never at a specified point from the other person measuring. Also I question how accurately the clinometer was calibrated. So overall I am pleased with my investigation, although I felt my method could have been improved in some areas I have managed to conduct a fair experiment, and I feel that my analysis and explanation of the rivers characteristics was accurate. ...read more.