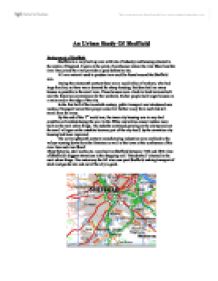 An Urban Study Of Sheffield

An Urban Study Of Sheffield Background of Sheffield Sheffield is a very built up area with lots of industry and housing situated in the centre of England. It grew at the point of confluence where the river Sheaf and the river Don joined the river provides a good defensive site. All raw material used to produce iron could be found around the Sheffield area. During the nineteenth century there was a rapid influx of workers, who had large families, so there was a demand for cheap housing. Builders built as many houses as possible in the small area. These houses were a back to back terraces built near the factories (convenience for the workers). Richer people built larger houses on a main road or the edge of the city. In the first half of the twentieth century, public transport was introduced new modes of transport meant that people could live further away from work but still travel from far away. By the end of the 2nd world war, the inner city housing was in very bad condition or bombed during the war. In the fifties and sixties council estates were built on the rural urban fringe. The suburbs continued growing as the city spread out the small villages on the outskirts became part of the city itself, by the seventies city housing had been improved. The early eighteenth century manufacturing industries were confined to the valleys running down from the Pennines as well as the town at the confluence of the river Don and river Sheaf. Many factories, steel works etc. were built in Sheffield between 1730 and 1870. ...read more.

The Burgess model is the most likely to suit this hypothesis as Broomhall is nearest to the CBD (1.5km) and Darnall and Intake are the next closest (4km) and furthest away is Ecclesall (5km). This is because when the city began the houses near the CBD were for factory workers and as time has gone on houses have got bigger as you go from the CBD to the outskirts of Sheffield. Hypothesis 3 HOUSING AND ENVIRONMENTAL QUALITY WILL CHANGE FROM EAST TO WEST OF SHEFFIELD - Therefore the housing and environmental quality of Darnall will be worst then Intake, then Broomhall and then Ecclesall will be the best. The Hoyt's Model is most likely to fit this hypothesis this because when the settlement grew the low class residential, Darnall and Intake for example were near the CBD because they were near to work, but as transport improved the light manufacturing spread out along these roads, railway lines and rivers leaving area for medium class residential and high class residential areas to be built. Methods The route in diagram 4 was the one we followed to visit 4 housing and environmental sites. At the points marked we drew field sketches looking over Sheffield one in the east and one in the west. Here are some of the locations we passed and things we saw on our route: - 5 Aspects of the Rural Urban Fringe: - 1. Lots of Cars 2. Industrial Areas 3. Shopping Mall (Meadowhall) 4. Derelict Buildings 5. Scrap heaps 20 Features driving through the Don Valley 1. Railway 2. River Don 3. Pubs 4. ...read more.

Supermarket 19. Brown Field Sites 20. Houses As you can see there are plenty of industries and factories however on the west of sheffield its another story with fields schools and houses as seen in the field sketch looking over the west of Sheffield. In the rural urban fringe here are a few things that was seen: lots of cars, industrial areas, shopping mall (Meadowhall), derelict buildings and scrap heaps. On the edge of the CBD there were: * Church * Shops * Offices * Flats * High Rise Buildings * Car-parks * Supermarket (Safeway) * Car Dealers * Petrol Stations * Pubs This hypothesis has been proved correct as Darnall and Intake are the worst areas with broom hall and Ecclesall being the best, there fore HYPOTHESIS 3 IS CORRECT Evaluation This project assignment has its good points and bad points. The good aspects of it is that there are plenty of things that you have to fill in and this makes it easy to show and explain your diagrams, results etc. The main limitation though is that even though there is a lot to take in there is nothing that you have to plan for yourself the survey would be a lot more varied if you had to come up with your own methods of recording information. For example the housing and environmental survey could have been a lot more thorough by adding other aspects such as signs of urban incline/decline so that in the end you can tell which place is improving and which places are deteriorating. Apart from that the projects methods were good and the layout was simple therefore making it easier to record and show results. ?? ?? ?? ?? ...read more.