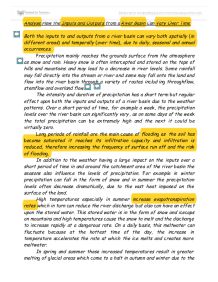 Analyse How the Inputs and Outputs from a River Basin Can Vary Over Time Both the inputs to and outputs from a river basin can vary both spatially (in different areas) and temporally (over time), due to daily, seasonal and annual occurrences. Precipitation mainly reaches the grounds surface from the atmosphere as snow and rain. Heavy snow is often intercepted and stored on the tops of hills and mountains and may lead to a decrease in river levels. Some rainfall may fall directly into the stream or river and some may fall onto the land and flow into the river basin through a variety of routes including throughflow, stemflow and overland flow. The intensity and duration of precipitation has a short term but regular effect upon both the inputs and outputs of a river basin due to the weather patterns. Over a short period of time, for example a week, the precipitation levels over the river basin can significantly vary, as on some days of the week the total precipitation can be extremely high and the next it could be virtually zero. ...read more.

Lithology of river basins can also affect the output of a river as those river valleys which are made up of permeable or porous rocks such as chalk and sandstone allow the water to pass through them into underground water stores for instance aquifers. Limestone also allows water to pass through it into bedding planes and joints. Due to this, areas of the river basin which are made up of this type of rock will have low rates of surface run off and no surface streams due to high rates of infiltration through the rocks and soil, reducing or moderating the input into the river's main channel. Impermeable rocks such as granite however, will not allow any water whatsoever to infiltrate through them and areas of land which contain these rock types in their lithology will be subject to a higher drainage density (surface streams) and a higher level of runoff into the main river channel, decreasing the overall lag period of the river basin and increasing the total output, as well as causing the discharge to fluctuate rapidly over a short period of time and can be therefore more prone to flooding. ...read more.

In the summer, evaporation is more frequent due to the higher temperatures and low levels of humidity and in winter, evaporation rates are very low as the wetter and colder periods decrease the rate of evaporation. Evaporation has also been reduced by man building amenities such as drainage systems where the surface water is channelled underground. As an increased demand for water through industry, homes and expanding populations also contributes to a river basins overall output, fresh water stores, demand by man, global warming and precipitation levels are only a few of the short term effects placed upon the rivers overall output total. Groundwater stores and levels of precipitation are linked to the stream flow, baseflow and throughflow found in a river basin, all of which have a large impact upon the total output of the basin itself. An increase in the levels of groundwater can lead to a decrease in overland flow and the output of the river. The numerous inputs and outputs of a river can vary dramatically over time due to changes in all aspects of life including climate, urbanisation, relief and precipitation levels which fluctuate both diurnally and seasonally. As the weather and atmospheric conditions are now unpredictable, no one can determine how these inputs and outputs will continue to change over time. ...read more.

This is a reasonable answer to what appears to be a simple question but isn't! It is difficult to stick to the question as set. The temptation is to drift on to other factors affecting discharge - which has happened here. Overall the author shows an understanding of the key ideas. The answer would benefit from a clearer explanation at the beginning of the idea of the river basin as a "system" .