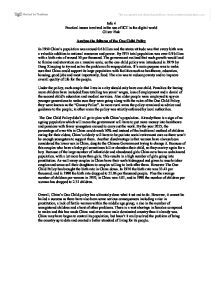 Analyse the failures of the One Child Policy in China.

Analyse the failures of the One Child Policy In 1950 China's population was around 0.6 billion and the states attitude was that every birth was a valuable addition to national resources and power. By 1975 total population was over 0.9 billion with a birth rate of around 30 per thousand. The government realised that such growth would lead to famine and starvation on a massive scale, so the one child policy was introduced in 1979 by Deng Xiaoping to try and solve the problem of overpopulation. It's main purpose was to make sure that China could support its large population with facilities such as healthcare, education, housing, good jobs and most importantly, food. ...read more.

Already there is a sign of an ageing population which will mean the government will have to put more money into healthcare and pensions with fewer youngsters around to carry out the work. By the year 2025, the percentage of over 65s in China could reach 30% and instead of the traditional method of children caring for their elders, China's elderly will have to be put into social retirement care as there won't be enough youngsters to support them. Another disadvantage is that women have always been considered the lower sex in China, despite the Chinese Government trying to change it. Because of this couples who have a baby girl sometimes kill or abandon their child, so they can try again for a boy. ...read more.

Overall, China's One Child policy has ultimately done what it set out to do. However, it cannot be hailed a success as there have also been some serious consequences including a rise in prostitution, a lack of fertile women within the middle age group, a rise in the number of unregistered children and a host of other problems. There is a vast shortage in females compared to males and this has made China and even more male dominated country than it already was. China may have began to control its population, but hasn't it really solved the problem of bring the country up to date and created a better standard of living for its people. ?? ?? ?? ?? Info 4 Practical issues involved in the use of ICT in the digital world Oliver Pink ...read more.