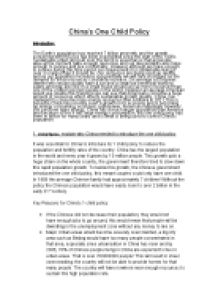 ﻿China?s One Child Policy Introduction: The Earth?s population has reached 7 billion presently and the growth concerned with this rise has been exponential since the start of the 1900s. Sustainable urban living all over the world is essential so that all people alive at the moment have enough resources and our descendants also have enough to survive and live comfortably. However although we have enough to survive during this time period our requirements for sustainable living is over 3 x larger than it should be. Our resources are being used up rapidly and as our population increases exponentially we will face shortages as the demand for these resources constantly increase. On average a European dweller who would usually have a car and a small but beneficial working salary and may also live in a small house would use up more resources than one of the 2 billion poorest people in the world, however an average American would use double this therefore we can see that Americans consume a huge amount of resources which effects sustainable growth greatly. China, has managed to consume more energy resources than America in 2011, this is because China has recently seen a growth in its economy and is becoming an energy consuming, economic superpower. American individuals however still consume more energy; China has a much larger population than America and because of this it has large energy consumption, the one child policy has been in action for many years and is what is being used to control China?s population. ...read more.

There is free contraception available. 3. How were the methods employed received by the outside world? What issues and conflicts became evident? It instantly became evident to the world beyond China that their 1 child policy violated human rights in a huge way. Forcing a family to reduce the numbers in their own family is not a governmental right in many people?s eyes. It is up to the couple on how many children they want! The International Conference of Human Rights states that; humans have the right to choose responsibly, the size of their families. Many of the Chinese government actions completely shocked the world. One of the many stories that have disgraced the outside world was the eradication of many human foetuses? in pregnant women who already had 1 child or more. Some women who were 8 months into pregnancy were forced to abort their children to agree with the policy. Also many women who managed to have their child born, had their child taken away from them and killed, this was a truly cruel act that the Chinese government overlooked completely. In 2002, the Chinese government introduced the law that there could be no physical attempt to stop women having children e.g. abortion or sterilisation, however nobody can be certain that this has completely stopped and the government seemingly only introduced this law to discontinue any global human rights outrage. ...read more.

Other families that violate the policy will have to face large penalties against them. 1. In 2007 approximately 36% of Chinese had to abide by the one child policy. 2. More than 50% of China?s population were allowed a second child, if there first born was a girl or disabled. 3. 10% of Chinese were allowed two children regardless of their genders. 4. 1.6% of Chinese people could have had as many children as they wanted. The one child policy was initially used for only one generation to be affected so that China?s population would experience a quick decrease in population. The Chinese government however have seen it to be a success and have accepted it as an ongoing policy. China has become more lenient in recent years with the one child policy. During the Sichuan earthquake in 2008 many people died including first born children in the one child policy. Parents, who wanted a second child having lost their first, were allowed by the Chinese government to have a second child without penalties. Also citizens of China who are part of the ethnic minorities, such as all non ? Han ethnic groups have different laws regarding their numbers of children. They are allowed two children whether they live in rural or urban areas. This is in order to stop any racial segregation in China. The ideas that have been carried out to improve the policy like the ones above have been received positively by the outside world. ...read more.