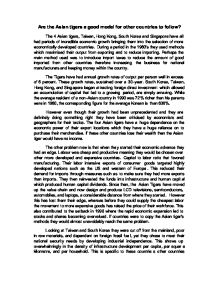 Are the Asian tigers a good model for other countries to follow?

The 4 Asian tigers, Taiwan, Hong Kong, South Korea and Singapore have all had periods of incredible economic growth bringing them into the selection of more economically developed countries. During a period in the 1960’s they used methods which maximised their output from exporting and to reduce importing. Perhaps the main method used was to introduce import taxes to reduce the amount of good imported from other countries therefore increasing the business for national manufacturers and keeping money within the country.

The Tigers have had annual growth rates of output per person well in excess of 6 percent. These growth rates, sustained over a 30-year. South Korea, Taiwan, Hong Kong, and Singapore began attracting foreign direct investment which allowed an accumulation of capital that led to a growing period, are simply amazing. While the average resident of a non-Asian country in 1990 was 72% richer than his parents were in 1960, the corresponding figure for the average Korean is than 638%.

However even though their growth had been unprecedented and they are definitely doing something right they have been criticised by economists and geographers for their tactics. The four Asian tigers have a huge dependence on the economic power of their export locations which they have a huge reliance on to purchase their merchandise. If these other countries lose their wealth then the Asian tiger would have no income.

The other problem now is that when they started their economic advance they had an edge. Labour was cheap and productive meaning they would be chosen over other more developed and expensive countries. Capital to labor ratio that favored manufacturing. Their labor intensive exports of consumer goods targeted highly developed nations such as the US and western of Europe. This reduced their demand for imports through measures such as to make sure they had more exports than imports. They then reinvested the funds into infrastructure and human capital which produced human capital dividends. Since then, the Asian Tigers have moved up the value chain and now design and produce LCD televisions, semiconductors, automobiles, and laptops, a considerable distance from where they started. However this has lost them their edge, whereas before they could supply the cheapest labor the movement to more expensive goods has raised the price of their workforce. This also contributed to the setback in 1990 where the rapid economic expansion led to stocks and shares becoming overvalued. If countries were to copy the Asian tiger’s methods they would almost unavoidably reach the same problem.

Looking at Taiwan and South Korea they were cut off from the mainland, poor in raw materials, and dependent on foreign fossil fuel, yet they chose to meet their national security needs by developing industrial independence. This shows up overwhelmingly in the density of infrastructure development per capita, per square kilometre, and per household. This is specific to these countries other countries trying to copy there economic models would probably have issues as their situation would be different

Looking at India as an example of a country which is rising through its economic levels they are investing in IT and services industry. The Four Asian tigers started their development in a time when this wasn’t as major. In fact the needs of the world now are completely different to the 1960’s. The need for cheap manufacturing is still being fulfilled by the four Asian tigers. For other countries to use the same method they would need even cheaper labor to start any competition.

In summary the Four Asian tigers have succeeded so well because they filled a niche in the global system offering cheap labor and productive labor. Other countries would find it difficult to fit in this niche so as India have done need to fulfill other important parts of the system. The location of these countries also played a part whereas some countries could easily start profiting as neighboring countries did increasing land based trade these countries couldn’t due to being sea based of locked in by rivaling countries.