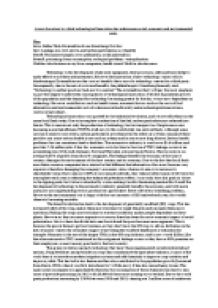 Assess the extent to which technological Innovation has unforesen social, economic and environmental costs

Transfer-Encoding: chunked ﻿Assess the extent to which technological Innovation has unforeseen social, economic and environmental costs Plan: Intro: Define Tech, Externalities & use Kranzbergs first law Cars: Leakage-eco, Co2-enviro, and carbon particulates-soc (health) GeneR: Monsanta example, cross-pollination, social polarisation GreenR: poisonings from consumption, ecological problems- eutrophication Mobiles: take business away from companies, health issues? Built in obsolescence Technology is the development of physical equipment, their processes, skills and knowledge to make effective use these advancements. However the innovation of new technology comes with its disadvantages. Externalities are the costs or benefits that a use of a technology creates for a third party. Consequently, due to the mix of costs and benefits, the philanthropist- Kranzberg famously said: ?Technology is neither good nor bad, nor it is neutral.? The externalities that I will pay the most emphasis on, are the negative unforeseen consequences of technological innovation. With the exponential growth of the population and the demand for technology becoming greater by the day, we are now dependent on technology. However social factors such as health issues, economic factors such as the costs of fuel alternatives and environmental costs of a decrease in biodiversity make technological innovation a controversial subject. Technological innovation was sparked by the industrial revolution, and we are still reliant on the same fossil fuels today. Due to incomplete combustion of the fuel, carbon particulates are released into the air. ...read more.

This is because the poorer farmers get less business, as they don?t have the GM crop to sell on, furthermore the lack of money creates the secondary impact of not being able to afford healthcare or education for example. Monsanto is the one of the largest TNCs in the GM crop industry, and is now worth $15bn. Like the other automotive TNC?s mentioned in this assignment leakage occurs as they have a 45% premium on their employees, so most money goes back to the host country. The green revolution spreads technology that hasn?t been implemented outside industrialised nations. Using fertilisers and pesticides on crops has transformed the agriculture industry, it most of the work done is to introduce modern irrigation systems and add chemicals to improve crop varieties and improve yields. This has led to less famine and has also contributed to the population growth (Increased from 4bn in 1930s when it was first introduced to 7.125bn now). It has also caused many issues. The main social consequence is again health related as the consumption of these chemicals has lead to 1mn cases of pesticide poisonings in 2015 with 20,000 of these cases turning out to be fatal. Due to the world grain production increasing by 230% between 1950 and 2015, clearing out 2 million acres of rainforests for grain. This in turn has decreased biodiversity in those areas by on average 2.45% consequently unbalancing the local food web. ...read more.

With the amount of mobile devices set to exceed the human population in the next 5 years, production is going to be faster than ever. In 2015 it was estimated that mobile production released 36mn tonnes of C02 into the atmosphere, due to the requirement of fossil fuels to work and make the machines for production. The versatility of the smartphone has changed our lives, and business? across the globe. However with its built in obsolescence, and the materials being hard to recycle, many mobiles are finding themselves on landfill sites harming the environment. Overall the economic impact of technological innovation is the greater than the other unforeseen consequences. The externalities it caused by the genetic, and the green revolution led to the secondary impacts of having a lack of money for healthcare and education. By damaging the potential of the future these technological innovations cannot be seen as sustainable. As this development creates the social polarisation, between the rich and the poor, it also further increases the difference between the North South divide, as the money from the TNC?s such as Audi sees 99% of their money go back to Germany, and 1 % stays in Mexico. The environmental concerns are the second largest in my opinion due to the huge amounts of carbon dioxide emitted, and how close we are to the global temperatures tipping point and the further consequences this has. Finally I put social concerns last as they are mainly short term, and should be solved by new technology in the next decade or two. ...read more.