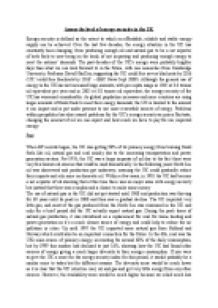 Assess the level of energy security in the UK

﻿Assess the level of energy security in the UK Energy security is defined as the extent to which an affordable, reliable and stable energy supply can be achieved. Over the last few decades, the energy situation in the UK has constantly been changing, from producing enough oil and natural gas to be a net exporter of both fuels to now being on the brink of not importing and producing enough energy to meet the nations? demands. The past decades of the UK?s energy were probably brighter days than what we can look forward to in the future, with one researcher from Cambridge University, Professor David MacKay, suggesting the UK could face severe blackouts by 2016 (UK ?could face blackouts by 2016? ? BBC News Sept 2009). Although the general use of energy in the UK has not increased huge amounts, with per capita usage in 1965 at 3.6 tonnes oil equivalent per year and in 2005 at 3.8 tonnes oil equivalent, the energy security of the UK has worsened considerably. As global population increases and more countries are using larger amounts of fossil fuels to meet their energy demands, the UK is limited to the amount it can import and is put under pressure to use more renewable sources of energy. ...read more.

The falling production and rising prices of oil are predicted to have a huge negative effect on the UK’s economy. We could see a £5 billion profit in 2000 to a deficit of over £20 billion by 2012. It is estimated that there are still 20 billion barrels of oil available to exploit, but there is a worry that in the competitive market, investment is likely to go to other places in the world and this oil could go to waste. There are also worries that with the declining production and increased reliance on imports that our oil supply could be limited. There is hope that drilling in the Falkland Islands will produce enough oil to pay-off the billion pound deficit. The UK is also having serious problems with coal and gas production which is leading to even more imports. We have once again become a net importer of both fuels, and as the market becomes more competitive these fuels will sell themselves to the highest bidders meaning that everyone in the UK will have to start paying more for their energy. Many people are starting to question why we do not use more renewable energy sources like wind, solar or nuclear energy. Critics say that we shouldn’t rely on wind energy because of its intermittent nature and it would make more sense to spend the money on improving nuclear technologies. ...read more.

Fells also makes a point about how we will have to keep many nuclear and coal-fired power stations open long past their ‘sell-by-date’ which would not be good for the environment. Fells believes the controversial Kings North power station in Kent could also be needed, but it would need to be fitted with carbon capture and storage technology before it was brought into use. Ofgem have produced a major report on Britain’s energy supplies, to which it was concluded that by 2015 we will be hit by a ‘perfect storm’ that could cost the UK at least £200 billion to secure our energy supplies but to also meet carbon emissions targets set by the Kyoto Protocol. Conclusion Over the past 5 decades, the UKs energy situation has never been great, we have always relied on some foreign imports and we have never really introduced any major renewable energy schemes. However, our energy security has become progressively worse and is predicted to get worse still. If we do not start to introduce some more nuclear plants or renewable energy schemes then we will have very little energy available to us as oil prices rise and supplies run low. Power is soon to become a very expensive commodity as we try to cope with the challenge of rapid growth and so it is certain that very soon everyone in the UK will have to start paying more for their power. ...read more.