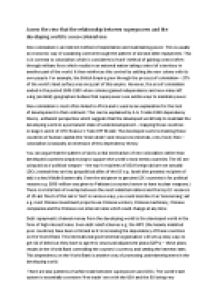 ﻿Assess the view that the relationship between superpowers and the developing world is a neo-colonial one Neo-colonialism is an indirect method of exploitation and maintaining power. This is usually an economic way of sustaining control through the pattern of aid and debt repayments. This is in contrast to colonialism which is considered a ?hard? method of gaining control often through military force which results in an external nation taking control of a territory in another part of the world. It then reinforces this control by settling the new colony with its own people. For example, the British Empire grew through the process of colonialism ? 27% of the world?s land surface was once part of this empire. However, the era of colonialism ended in the period 1945-1980 when colonies gained independence and now many left wing (socialist) geographers believe that superpowers use subtle ways to maintain power. Neo-colonialism is most often linked to Africa and is used as an explanation for the lack of development in that continent. This can be explained by A.G. Franks 1969 dependency theory -a Marxist perspective which suggests that the developed world help to maintain the developing world in a permanent state of underdevelopment ? trapping these countries in stage 1 and 2 of WW Rostow?s ?Take Off? Model. ...read more.

The world?s three major stock markets (London, New York and Tokyo) are all in the ?west?. In today?s globalised world emerging powers have started to benefit from world trade, mainly due to the role of TNCs e.g. Nike, which originate from the west. Although countries such as China have gained hugely from this there are still many LDC?s that have been cut off from globalisation ensuring that they stay in a state of ?underdevelopment?. There is much controversy over whether the Chinese Foreign direct investment (FDI) programmes in Africa have been a mechanism of neo-colonialism or genuine development. The increasing activity of Chinese entrepreneurs in Africa is beginning to transform the world?s poorest continent; African corrupt governments have previously put a ?brake? on economic development however this new wave of investment has meant that these countries can move to the ?take off? stage of W.Rostow?s 1960 modernisation theory. China can teach a lot to the African continent ? they have lifted 400 million people out of poverty by combining state intervention in the economy with incentives to attract private investment. China has then reinvested the profits from these exports from FDI in order to industrialise. These stages of development are now being encouraged in China?s relationship with Africa. ...read more.

This influx of the Chinese has resulted in inevitable culture clashes and social issues e.g. the Chine mistreating African workers creating cultural tensions. In addition, the Chinese are outsourcing their most polluting industries e.g. leather tanning and metal smelting to the African zones which will create negative impacts in the long run. In conclusion I believe that the Chinese FDI programmes in Africa are a mechanism of neo-colonialism rather than genuinely trying to help them develop; only ?pockets? of Africa will benefit from the investments and the poorest LDCs will not, creating greater inequality across the continent. If the Chinese are genuinely helping the African continent then they would provide a more equal spread and target the neediest countries. Although this industrialisation may bring employment opportunities, new technology, training and tax revenue, as well as much-needed infrastructure ? I believe that the profit leakage, pollution and low wages that are created outweigh the benefits of the investment and therefore the Chinese are not benefiting these economies. Although these new programmes may look very beneficial for the short term to act as a catalyst for development, however in the long run these countries will struggle to pay off the loans to the Chinese which would mean that they would never ?take off? and follow the example set by the Chinese. ...read more.