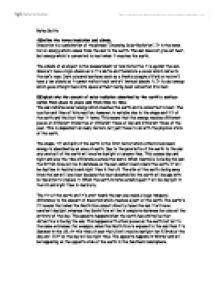 B)Explain why the amount of solar radiation absorbed by the earth's surface varies from place to place and from time to time.

A)Define the terms insolation and albedo. Insolation is a combination of the phrase 'Incoming Solar Radiation'. It is the name for all energy which comes from the sun to the earth. The sun does not give out heat, but energy which is converted to heat when it reaches the earth. The albedo of an object is the measurement of how reflective it is against the sun. Snow will have a high albedo as is it is white and therefore a colour which reflects the sun's rays. Dark coloured surfaces such as a freshly ploughed field or rock will have a low albedo as it cannot reflect heat and will instead absorb it. It is also energy which goes straight back into space without having been converted into heat. B)Explain why the amount of solar radiation absorbed by the earth's surface varies from place to place and from time to time. ...read more.

The opposite happens when the earth has orbited so that Antarctica is facing the sun. This happens with other places on the earth but not to the same extremes. For example, when the North Pole is exposed to the sun then it is Summer in the UK. At this time of year the UK will receive sunlight for 2/3rds of the day and 1/3rd of the day will be night time. The opposite happens in Winter and will be happening on the opposite side of the earth in the Southern hemisphere. Latitude is a factor in spatial and temporal differences in the receipt of insolation. The higher the latitude the higher the sun will be in the sky and so therefore has to travel further to reach the earth. This is due to the curvature of the earth, which also controls how concentrated the sun will be. At the equator the sun travels in a straight line to reach the earth so the 'ray' will be concentrated and more insolation will reach that spot. ...read more.

Oceans are translucent so have more insolation spread through them. Due to this the sea will always appear colder than the land because the energy is less concentrated, although it will retain heat for a lot longer than the land. This phenomena means that areas of land by the sea will always be warmer than those inland. The UK has an equable climate due to this. The sea acts as a hot water bottle to keep the edges of the country warm. Winds coming from across the sea carry the warmth inland so the effects appear evident throughout the country. Finally, the atmosphere itself is a major factor in the storage of energy. The atmosphere acts as a greenhouse to stop energy from escaping into space. This is helped by CO2 emissions which form a 'blanket' which reflects the energy back to the earth enabling it to become heat. Without this 'greenhouse' much of our energy would escape from the earth leaving the earth cold. Nyika Suttie ...read more.

Clear and well structured report, addressing each factor. Some integration of factors, eg. altitude and albedo. Some explanations, although clear and well written, could be enhanced with annotated diagrams.Appropriate use of a variety of geographical terminology - though albedo needs checking. A concluding sentence or short paragraph would be good to sum up the report for the reader.