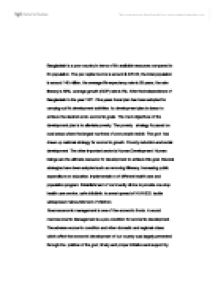 Bangladesh is a poor country in terms of it's available resources compared to it's population. The per capita income is around $ 370.00, the total population is around 140 million, the average life expectancy rate is 58 years, the rate literacy is 62%, average growth (GDP) rate is 5%. After the independence of Bangladesh in the year 1971. Five years fiscal plan has been adopted for carrying out it's development activities. Its development plan is drawn to achieve the desired socio-economic goals. The main objectives of the development plan is to alleviate poverty. The poverty strategy focussed on rural areas where the largest numbers of poor people reside. The govt. has drawn up national strategy for economic growth. Poverty reduction and social development. The other important sector is Human Development. Human beings are the ultimate resource for development to achieve this goal. Several strategies have been adopted such as removing illiteracy, increasing public expenditure on education, implementation of different health care and population program. Establishment of community clinics to provide one stop health care service, safe childbirth, to arrest spread of HIV/AIDS, tackle widespread malnourishment of children. Macroeconomic management is one of the economic fronts. A sound macroeconomic Management is a pre-condition for economic development. The adverse economic condition and other domestic and regional crises which affect the economic development of our country was largely prevented through the policies of the govt, timely and proper initiative and support by both govt. ...read more.

Following the peace accord the development process in the area has been accelerated. The other social and physical infrastructure have been under taken with domestic and donor assistance. The govt. attaches great importance to participation of local people in implementation of development projects in the Hill Tracts areas. Govt. of Bangladesh is trying to formulate appropriate policies and institutions to ensure optimal mobilization of domestic and foreign resources through efficient utilization for sustainable economic development(bangladeshbank.org). Achievements have been made in food production, the rate of literacy increased up to 62%, community health facilities have been developed up to the remotest Corner of the country, rural employment and wage rate also have been increased, the traditional money lending has been curtailed, remittance for the expatriate work force from foreign countries has been increased, non-farm, small business, service sector employment have been widened, women entrepreneurship specially in the rural areas have been increased through micro-credit system by the NGO's(www.epbd.com/economy.html) The deteriorated law and order situation, vulnerability of the poor and the weak has increased enormously, accountability specially by the law enforcing agencies is lagging far behind the expectation, political institution have not been strengthened satisfactorily, Poor and disadvantaged people are not aware about their right, local govt. system not yet empowered to function with the opinion of the people the elect. ...read more.

is trying to convince USA, EU to allow duty free and quota free access of Bangladesh product to those countries. Bangladesh is also trying to implement the decision of WTO to mobilize support for duty free access to Bangladesh as well as to other LDC'S. Govt. is trying to create sustainable environment such as ensuring political stability, improvement of infrastructure including telecommunication, power and port facilities, these will help increase efficiency to face in the competitive markets. The economy of Bangladesh is mostly dependent on agriculture. Agriculture contributes around 25% in GDP. More than 60% labour forces are employed in this sector, whereas from Industry 13% added to GDP and only about 7% labour force are engaged in Industrial sector. Bangladesh earns it's foreign exchange through exporting RNG, knit wear leather, shrimps, jute and jute goods. Few more items have potential export market such as ceramics, medicine, toiletries, and footwear. Bangladesh imports mainly machinery, petroleum, cotton, wheat, oil and oil, seeds. Remittance form expatriate Bangladeshis are the second highest source of our foreign exchange earning after the RMG sector. But for the raw materials or the RMG largely imported and much if it's earning are drained away for the cost of import. So emphasis is being given for manpower export. In conclusion it could be said that Bangladesh's economy is improving but in a slow pace. But by next 5 years the country will be in a better position which will be very helpful for the country. ...read more.