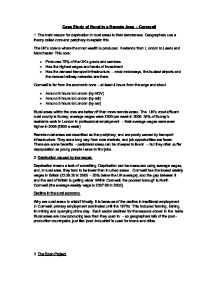 Case Study of Deprivation in a Rural Area - Cornwall

Case Study of Rural in a Remote Area - Cornwall 1. The main reason for deprivation in rural areas is their remoteness. Geographers use a theory called core and periphery to explain this. The UK's core is where the most wealth is produced. It extends from London to Leeds and Manchester. This core: * Produces 75% of the UK's goods and services * Has the highest wages and levels of investment * Has the densest transport infrastructure - most motorways, the busiest airports and the densest railway networks are there. Cornwall is far from the economic core - at least 4 hours from the edge and about * Around 8 hours to London (by HGV) * Around 6 hours to London (by rail) * Around 5 hours to London (by car) Rural areas within the core are better off than more remote areas. The UK's most affluent rural county is Surrey; average wages were �500 per week in 2006. 35% of Surrey's residents work in London in professional employment - their average wages were even higher in 2006 (�800 a week) Remote rural areas are described as the periphery, and are poorly served by transport infrastructure. They are a long way from core markets, and job opportunities are fewer. There are some benefits - peripheral areas can be cheaper to live in - but they often suffer depopulation as young people leave to find jobs. ...read more.

Investors have to start the process, and then apply for amounts of money from other sources, called match funding. This might come from public sources, e.g. local councils, or from private sources, e.g. banks. So, investors can: 1. Set up �20,000 of their own money 2. Get a bank loan for another �20,000, making �40,000 3. Ask local councils to match it to make �80,000 4. Bid for the South West Development Agency to match it to �160,000 5. Finally, bid for Objective One funds to match it, creating �320,000 Success rate - It is still the weakest economy in England. But from 1994-2004 it grew at 5.8% per year, ahead of the UK average of 5.4%. In 2003, the Cornish economy showed the greatest improvement of any region of the EU. However, its schemes have had varying success - from the greater-than-expected Eden project, to failing schemes like South West Film Studios. But Professor Peter Gripaios of Plymouth Business School criticises it. He claims that it was wrong to give Objective One funding to some projects. By 2007, Objective One had backed 580 projects in Cornwall with �230 million, but Mr. Gripaios claims that 'the jam has been spread too thinly on too many projects'. Success: 1. The Extreme Sports Academy at Watergate Bay - near Newquay airport, is targeting a younger age group. ...read more.

> Focusing on higher-value products, such as vegetables, cheese, and wine. > Adopting eco-approached to managing the environment, such as planting mixed woodland. > Adopting welfare approaches towards animals rearing which focus on the quality of care. Lobb's Farm Shop Until 2003, three brothers from the Lobb family, in south Cornwall, were making just �30,000 from their 800 acres, shared between three families. Their farm is near the Lost Gardens of Heligan, south Cornwall's second biggest tourist attraction after the Eden Project. They created a shop to sell their beef and lamb to a potential market of 463,000 visitors a year visiting the Gardens. The project, Lobb's Farm Shop, was financed using �200,000 funding from Objective One and central government. The shop's focus is meat and vegetables produced on the farm, and other locally sourced products such as Cornish wine, chesses, etc. It has created 14 new jobs, with more in the summer months. These include: * 5 butchers (2 full-time, 2 part-time and a trainee) * 1 full-time and 6 part-time shop assistants * 2 administrative staff It has generated over �600,000 in additional sales in 3 years. However, it is more than just a shop. It includes: * A visitor centre informing visitors about farming, and tours to show them what happens on a farm. * Ways of improving environmental quality on the farm by attracting wildlife - planting in ways that will attract birds and insects. * Managing and raising beef cattle in a welfare-conscious way. ?? ?? ?? ?? ...read more.