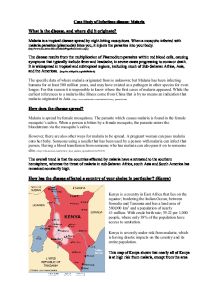 Case study of infectious disease - malaria and its effects on Kenya.

Case Study of Infectious disease: Malaria What is the disease, and where did it originate? Malaria is a tropical disease spread by night-biting mosquitoes. When a mosquito infected with malaria parasites (plasmodia) bites you, it injects the parasites into your body. (http://www.nhs.uk/conditions/malaria/Pages/Introduction.aspx) The disease results from the multiplication of Plasmodium parasites within red blood cells, causing symptoms that typically include fever and headache, in severe cases progressing to coma or death. It is widespread in tropical and subtropical regions, including much of Sub-Saharan Africa, Asia, and the Americas. (http://en.wikipedia.org/wiki/Malaria) The specific data of where malaria originated from is unknown; but Malaria has been infecting humans for at least 500 million years, and may have existed as a pathogen in other species for even longer. For this reason it is impossible to know where the first cases of malaria appeared. ...read more.

How has the disease affected a country of your choice in particular? (Kenya) Kenya is a country in East Africa that lies on the equator; bordering the Indian Ocean, between Somalia and Tanzania and has a land area of 580,000 km2 and a population of nearly 41 million. With crude birth rate; 39.22 per 1,000 people, where only 38% of the population have access to sanitation. Kenya is severely under risk from malaria; which is having drastic impacts on the country and its entire population. This map of Kenya shows that nearly all of Kenya is at high risk from malaria, except from the area surrounding Kenya's capital; Nairobi, which is at low to no risk from malaria. The most likely reason is that the majority of the economic wealth is concentrated at Nairobi, as it is the central business district of the country (urban). ...read more.

* The total fertility rate in Kenya is estimated to be 4.49 children per woman in 2012 * Life expectancy is estimated at between 47 and 55 years. (http://www.kemri.org/index.php & Wikipedia..Com) Management of Malaria in Kenya: However, the disease is trying to be managed using several methods; * Vector control using insecticide treated nets - Fifteen million nets were distributed between 2001 and 2009. insecticide treated net use by children under 5 years rose from 4.6 percent in 2003 to 50.2 percent in 2006 after a free mass insecticide treated net distribution targeting 3.4 million children under five. * Epidemic Preparedness and Response (EPR) - This approach is intended to improve epidemic preparedness and response by establishment of malaria early warning systems and carrying out preventive measures such as the Indoor Residue Spraying campaigns. * Information Education Communication - This strategy is to better arm the public with malaria preventive and treatment knowledge. ?? ?? ?? ?? ...read more.

A very good over view of Malaria, particularly focused on Kenya. The case study incorporates useful data and references it. To improve further, more detail about the breeding grounds and the reasons for the differences in the prevalence of the disease across the country would have been valuable.
4 stars