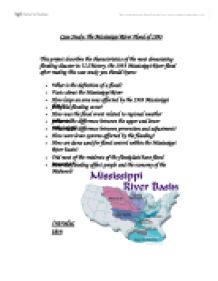 Case Study: The Mississippi River Flood of 1993 This project describes the characteristics of the most devastating flooding disaster in U.S history, the 1993 Mississippi River flood after reading this case study you should know: * What is the definition of a flood? * Facts about the Mississippi River * How large an area was affected by the 1993 Mississippi flood? * Why did flooding occur? * How was the flood event related to regional weather patterns? * What is the difference between the upper and lower Mississippi? * What is the difference between prevention and adjustment? * How were levee systems affected by the flooding? * How are dams used for flood control within the Mississippi River basin? * Did most of the residents of the floodplain have flood insurance? * How did flooding affect people and the economy of the Midwest? Introduction A flood is defined as the temporary overflow of a river onto adjacent lands not normally covered by water. The most devastating flood in U.S. history occurred in the summer of 1993. * The Mississippi River at St. Louis, Missouri, was above flood stage for 144 days between April 1 and September 30, 1993. * Approximately 3 billion cubic meters of water overflowed from the river channel onto the floodplain downstream from St. ...read more.

Discharge increases steadily downstream as more tributaries add water to the river. The map on the left shows the locations of four gaging stations and the graph above illustrates how discharge increases on the river between its source and St. Louis. The large increase near St. Louis is caused by the addition of the flow of the Missouri River. Modification of the Mississippi River The Mississippi River is one of the most heavily engineered natural features in the U.S. The character of the floodplain has changed to accommodate agriculture and urbanization. Approximately 80% of the original wetlands along the river were drained since the 1940's. Wetlands act as natural storage reservoirs for floodwaters. They absorb water during heavy precipitation and release it slowly thus reducing run-off to streams and decreasing flood volumes. The river channel itself has been artificially constrained by levees and floodwalls. These structures serve to increase the volume of water that can be held in the channel and thus increase the size of the flooded area if the levee breaks. Upper Mississippi River in July, 1992 Upper Mississippi River in July, 1993 We can either attempt to stop natural hazards from occurring (prevention) or recognize that they will happen and modify our life styles to deal with them (adjustment). Prevention There are two principal ways that engineers have attempted to control the flow of rivers in the Mississippi River basin: 1) ...read more.

city to lose its water supply when its water treatment plant flooded. More than 250,000 people lost drinking water for 19 hot summer days. Water pipes, contaminated by floodwaters carrying sewage and agricultural chemicals, had to be flushed out before the municipal water supply was reconnected. Economic losses in Des Moines totaled approximately $716 million. * The flooding submerged eight million acres of farmland. Production of corn and soybeans were down 5-9% as a result and corn prices rose by $0.15 per bushel. Floods deposited thick layers of sand in some fields. The U.S. Soil Conservation Service spent $25 million to buy flood-prone farmlands for conversion to natural conditions (e.g. wetlands). Conversion of natural lands to farmlands has resulted in greater run-off and exaggerated the effects of flooding. Modern farming methods leave plant residue on the surface and reduce run-off. * The Mississippi River itself is a crucial part of the Midwest's economic infrastructure. Barge traffic normally moves goods through a system of 29 locks between Minneapolis and St. Louis. Barges carry 20% of the nation's coal, a third of its petroleum, and half it exported grain. Barge traffic was halted for two months; carriers lost an estimated $1 million per day. Some power plants along the river saw their coal stocks dwindle from a two-month supply to enough to last just 20 days. * Hundreds of miles of roads built on the flat, wide floodplains were closed. Flooding is estimated to have cost $500 million in road damage. By: Tadas Balnys 10A ...read more.