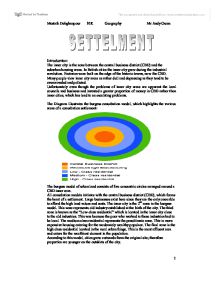 Introduction: The inner city is the zone between the central business district (CBD) and the suburban housing areas. In British cities the inner city grew during the industrial revolution. Factories were built on the edge of the historic towns, now the CBD. Many people view inner city areas as rather dull and depressing as they tend to be overcrowded and polluted. Unfortunately even though the problems of inner city areas are apparent the local councils and business and invested a greater proportion of money in CBD rather then inner cities, which has lead to an escalating problems. The Diagram illustrates the burgess conurbation model, which highlights the various areas of a conurbation settlement: The burgess model of urban land consists of five concentric circles arranged around a CBD inner core. All conurbation models initiates with the central business district (CBD), which forms the heart of a settlement. Large businesses exist here since they are the only ones able to afford the high land values and rents. ...read more.

However land was scarce and the problem was addressed by high-rise affordable housing. This is one of the reasons why so many inner city areas are dominated by high-rise housing today. The local councils and government during the 1960`s tried to address the problem of Low-cost housing by building high-rised council flats. Many people were housed but with time their opinions began to change. Council tenants as they were named began to complain of poor amenities and facilities in their estates. Lifts were often breaking; there was vandalism and crime. People began to feel insecure and feared for themselves and their family's safety. Big factories are derelict monuments of the industrial revolution. Terraced houses, built for the richer people in Victorian times, are now derelict and broadband up. Empty buildings are favourite targets for vandalism. Which adds to the problems in the area. Economic decline soon follows. Those who could afford have moved out into rich houses. Crime rates are tend to be higher in poorer areas in the inner cities. ...read more.

The government should introduce new plans to attract wealth and business into the inner cities thus eliminating many of the economic-related problems. In the past the government had attempted to address some of the issues of the inner cities particularly the housing problem. They were forced to build high-rised flats due to the limited space available. These projects soon proved unsuccessful ands these areas became common ground for vandalism and crime. People felt insecure and unsafe particularly the extremely venerable, namely pensioners and foreigners. In my opinion the problems of the inner cities are vast and considerable. There is no quick and easy solution. The government needs to attract investment and business into the areas to bring wealth and prosperity for the inner cities by attracting business. New opportunities can be created and high unemployment can be reduced. Facilities and amenities can also be improved all leading to a better quality of life. This is important to everyone because if they don't control the inner city by improving it, there would be a line between the rich and the poor and there would be more crimes on the streets & more muggings. Mostafa Dehghanpour 10K Geography Mr Andy Ouma 1 ...read more.

Overall rating: 4 out of 5 stars.
- Use of geographical theory and terminology is good, and well explained.
- One case study example has been mentioned, but it has not been integrated into the theoretical information.
- More use of specific examples - years, locations, projects, problems would add detail and show more depth of knowledge of the topic: use specific country or city names, years, statistics.
- The structure of the report is good, apart from the end is a little loose in terms of focus and conclusion as well as some repetition.