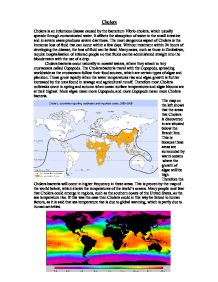 Cholera Cholera is an infectious disease caused by the bacterium Vibrio cholera, which usually spreads through contaminated water. It affects the absorption of water in the small intestine and in severe cases produces severe diarrhoea. The most dangerous aspect of Cholera is the immense loss of fluid that can occur within a few days. Without treatment within 24 hours of developing the disease, the loss of fluid can be fatal. Many cases, such as those in Zimbabwe, require hospitalisation of infected people so that fluids can be administered straight into the bloodstream with the use of a drip. Cholera bacteria occur naturally in coastal waters, where they attach to tiny crustaceans called Copepods. The Cholera bacteria travel with the Copepods, spreading worldwide as the crustaceans follow their food sources, which are certain types of algae and plankton. These grow rapidly when the water temperatures rise and algae growth is further increased by the urea found in sewage and agricultural runoff. ...read more.

Cholera outbreaks in Zimbabwe have occurred annually since 1998, but previous epidemics have never reached these proportions. The last large outbreak was in 1992 with 3000 cases recorded. The main cause of the outbreak was the lack of access to safe water in urban areas. This was due to the collapse of the urban water supply, sanitation and rubbish collection systems. Also the rainy season leads to faeces with cholera bacteria being washed into water sources, in particular public drains, providing readily available but contaminated water. The areas affected have been demonstrating weaknesses in case management and/or infection control practices. Potential causes of the high fatality rate that must be addressed are: 1. delays in people seeking treatment: 2. poor accessibility to health facilities: 3. gaps in case management: and 4. Inadequate infection control. Cholera cases have also been reported either side of Zimbabwe's border with South Africa, Botswana and Mozambique, which demonstrates the sub regional extent of the outbreak. ...read more.

2. Decrease mortality by: * Ensuring early case detection; * Improving access to health care; * Ensuring adequate care, including feeding support. This approach will involve close partnership with public health authorities in Zimbabwe and neighbouring countries, as well as nongovernmental organizations and United Nations agencies including UNICEF. An Inter-Agency Rapid Assessment Team is going to be established to investigate and confirm outbreaks. The emphasis is going to be on rapidly addressing the known risk factors for cholera transmission. The immediate priorities include: * Standardized case reporting to understand the distribution of Cholera and guide treatment priorities * Ensuring access to safe water and sanitation; * Standardized case management to reduce mortality; * Producing treatment and prevention materials, as well as prevention messaging campaigns to lessen the risk to populations. The total cost of health response activities for three months is 2 million dollars, which includes the supply of: * Cholera and diarrhoeal disease kits; * Emergency health kits; * Water purification equipment; * 10 portable laboratory kits for diagnosis; * Personnel (including for epidemiological control and Health Cluster coordination); * Cholera treatment training. ...read more.

An excellent overview of Cholera using a specific case study. This answer would benefit from a conclusion and referencing.
4 Stars.