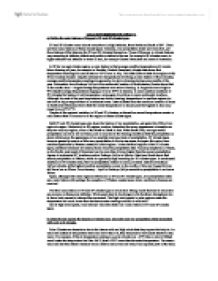 COLD ENVIRONMENTS: ESSAY 1 a) Outline the main features of Koppen's ET and EF climate types. ET and EF climates occur almost everywhere in high latitudes, those North and South of 60�. There are three main features of these climate types: Coldness, low precipitation totals and wind chill, yet these features differ between the ET and EF climates themselves. These differences in climate features vary according to latitude, altitude and position relative to the sea. For example EF climates occur in higher altitudes and latitudes or areas in land, for example Central Greenland and most of Antarctica. In EF (or ice cap) climate regions a main feature is that average monthly temperatures will remain below freezing all year, for example in Eismitte, Central Greenland, climate data shows that temperature recordings do not rise above -12�C even in July. This data differs to that from regions with ET (or tundra) climates. Despite coldness/low temperatures still being a main feature of these climates, average monthly temperature readings do generally rise above freezing during some months of the year. Information from Ruskoye Ust'ye in the continental location of North-eastern Russia shows that in the months June - August average temperatures were above freezing. In August it rose as high as 9�C despite average temperatures dipping as low as -39�C in January. ...read more.

Again, although with clear regional differences in EF and ET climate types, low precipitation totals are a main feature with perhaps the exception of Western coastal areas where maritime influences are received. The third main feature of ET and EF climate types is wind chill. Strong winds that lead to wind chill are common in these polar latitudes. Wind speeds tend to be stronger in the Southern hemisphere due to fewer land masses to interrupt the movement. The high wind speeds in polar regions make the temperature feel much lower than the thermometer readings and this is wind chill. Due to high wind speeds, wind chill (or wind chill factor) is a main feature of ET and EF climate types. b) Describe and explain the hazards of intense cold, wind chill and low precipitation totals associated with such cold climates. Polar Climates are hazardous due to the intense cold and high winds that they expose the body to. As wind chill makes air temperature feel even lower than it is, they body has to work much harder to stay warm. For example, if the air temperature reading in a polar climate was -12�C then a wind of 40kph would make the temperature feel like -34�C, that's 22�C lower than the actual temperature. ...read more.

As the water expands, this results in pressure exerted on the rock. If this process is continually repeated, the rock will eventually give into the pressure and crack into pieces. The rate of this weathering can vary depending on how often the water freezes and thaws. For example in extremely high latitude environments, such as EF (ice cap) areas, freeze-thaw weathering will have little effect as the temperature will very rarely rise above freezing point. Because the thawing of ice in EF environments will seldom occur the rate of freeze-thaw weathering is very low. In mountainous regions (high altitude) such as the Alps the air temperature will often fluctuate between below freezing over night and temperatures just above freezing in daylight hours (diurnal freeze-thaw). This increased rate of freezing and thawing results rocks cracking under the pressure at a much quicker rate than those in extreme polar environments such as Antarctica. Evidence of the huge effect that freeze-thaw weathering has on mountainous regions is the numerous scree slopes that can be seen in these areas. Although freeze-thaw is by far the most effective and widespread form of rock weathering in these environments there is a few examples of plant root weathering in lower mountainous areas, but few high altitude and high latitude areas can maintain larger plants life. Also in lower mountainous areas a little acid rain weathering can also occur. ...read more.