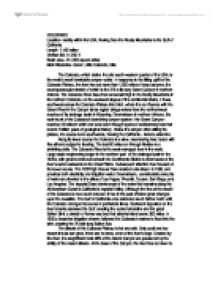 COLORADO: Location- mainly within the USA, flowing from the Rocky Mountains to the Gulf of California. Length- 1,450 miles Vertical fall- 14,200 ft Basin area- 244,000 square miles Main tributaries- Green, Little Colorado, Gila. The Colorado, which drains the arid south-western quarter of the USA, is the world's most formidable canyon-cutter. In response to the tilting uplift of the Colorado Plateau, the river has cut more than 1,000 miles of deep canyons, the most spectacular stretch of which is the 220 mile long Grand Canyon in northern Arizona. The Colorado River rises from snowmelt high in the Rocky Mountains in the northern Colorado, on the westward slopes of the continental divide. ...read more.

Large-scale engineering began in the northern part of the drainage basin in the 1920s, with great tunnels cut beneath the Continental Divide to divert some of the river's water eastwards to the Great Plains. Subsequent attention has focused on the lower course. The 726ft high Hoover Dam created Lake Mead in 1935, and provides both electricity and irrigation water. Downstream, considerable amounts of water are diverted to the cities of Las Vegas, Phoenix, Tucson, San Diego, and Los Angeles. The Imperial Dam diverts most of the water that remains along the All-American Canal to California's Imperial Valley. Although the flow at the mouth of the Colorado is now much reduced, it has in the past effected great changes upon the coastline. ...read more.

The cold fog creates a katabatic wind by sinking into the valley, displacing warmer air, as here in the Grand Canyon, USA. The 710ft high Glen Canyon Dam is located in Arizona about 110 miles upstream of the Grand Canyon. It was constructed in the 1960s to store water from the winter rains to generate electricity later in the year, when the river's natural flow diminishes. By restricting the flow of the Colorado, the dam has had an alarming effect on the environment along riverbanks in the Grand Canyon. Instead of being scoured clean by regular winter floods, parts of the canyon are now starting to fill with sediment. In the 1990s, attempts were made to redress the balance by releasing artificial floods from the dam. ...read more.