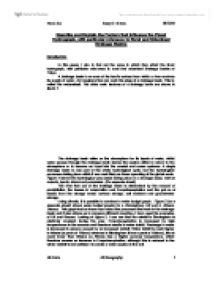 Describe and Explain the Factors that Influence the Flood Hydrograph, with particular reference to Rural and Urbanised Drainage Basins.

Describe and Explain the Factors that Influence the Flood Hydrograph, with particular reference to Rural and Urbanised Drainage Basins Introduction In this essay I aim to find out the ways in which they affect the flood hydrograph, with particular reference to rural and urbanised drainage basins of Tokyo. A drainage basin is an area of the land's surface from which a river receives its supply of water. An imaginary line can mark the edge of a drainage basin. This is called the watershed. The other main features of a drainage basin are shown in figure 1. The drainage basin relies on the atmosphere for its inputs of water, whilst water passes through the drainage basin leaves the system either to return to the atmosphere or to become an input into the coastal and ocean systems. A single drainage basin is one part of the whole hydrological cycle, but the hydrological processes taking place within it are most likely as those operating at the global scale. Figure 2 shows the hydrological processes taking place in a drainage basin, with its outputs, inputs, stores and processes. ...read more.

Rivers in other drainage basins rarely flood. There are six main factors that influence this: * Angle of slope: on steep slopes overland flow can be very high. This helps explain the lag time between precipitation and the arrival of water in stream channels. On low slopes these rates will be much reduced. * The nature of the drainage network: the main factor here is the density of drainage. This is defined as total area of basin divided by the length of active channels. The higher the drainage density the more likely flooding will occur because water moves more quickly in river channels than it does on the land surface or in the soil or ground. * Geological rock type and soil: impermeable rocks such as clays and shales, hard igneous and metamorphic rocks promote more surface overland flow. This moves much more swiftly than water flowing in the soil or ground. These rocks produce quick and high flood peaks on hydrographs. Chalk sandstones, limestone's and other permeable rocks have more regular hydrographs. * Vegetation cover: forests can regulate flow by intercepting rain, reducing rainfall intensity and increasing Evapotranspiration. This will reduce any dramatic flood peaks on the hydrograph. ...read more.

People's quality of life will be affected; due to localised flooding they would have less access. You suddenly get gutters, sewers and other drainage systems blocked, due to over flow of water. Conclusion Flooding is less likely when there is a lot of vegetation to intercept rainfall. In arable farm areas, interception is greatly reduced when fields are bare in winter. Urban land use increases the risk of flooding because water reaches river more quickly through underground drains and by flowing off impermeable surfaces, such as tarmac and concrete, roofs and gutters. Sandy soils have large pore spaces allowing rapid infiltration, so rainfall is soaked up quickly. Clay soils have small pore spaces slowing down infiltration and increasing the risk of flooding. If the soil has been compacted flooding is also more likely. Permeable rocks allow water to pass through reducing the flood risk. Flood hydrographs for rivers in urban areas are different to those for rivers in rural areas. They have a shorter lag time and a higher peak discharge; the rising and recession limbs are steeper. Nazia Zia Essay 2: Rivers 18/12/07 Mr Earle AS Geography 1 ...read more.