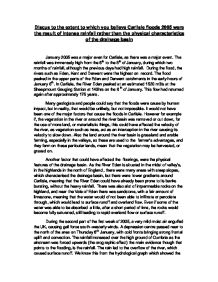 Discus to the extent to which you believe Carlisle floods 2005 were the result of intense rainfall rather than the physical characteristics of the drainage basin January 2005 was a major even for Carlisle, as there was a major event. The rainfall was immensely high from the 6th to the 8th of January, during which two months of rainfall, although the previous days had high rainfall. During the flood, the rivers such as Eden, Kent and Derwent were the highest on record. The flood peaked in the upper parts of the Eden and Derwent catchments in the early hours of January 8th. In Carlisle, the River Eden peaked at an estimated 1520 m3/s at the Sheepmount Gauging Station at 140hrs on the 8th of January. ...read more.

Another factor that could have affected the floorings, were the physical features of the drainage basin. As the River Eden is situated in the midst of valley's, in the highlands in the north of England, there were many areas with steep slopes, which characterised the drainage basin, but there were lower gradients around Carlisle, meaning that the River Eden could have already been prone to its banks bursting, without the heavy rainfall. There was also alot of impermeable rocks on the highland, and near the Vale of Eden there was sandstone, with a fair amount of limestone, meaning that the water would of not been able to infiltrate or percolate through, which would lead to surface runoff and overland flow. ...read more.

The rain led to the overflow of the river, which caused surface runoff. We know this from the hydrological graph which showed the peak rainfall being 50mm, and the peak discharge being 55 mm. The graph also shows how the rainfall from the previous days affected the capacity of the soil, making saturated, meaning not a lot of water could have been percolated through the soil. There is a steep gradient in the rising limb, to show how quickly the rain was walling, and a steep falling limb, showing the rate of velocity of the water droplets flow, which is also descending very steeply. Although we can deduce from the evidence that the rainfall was the main cause the human and physical factors, also had parts in the major flooding of Carlisle in 2005, and it could not all be blamed on the rainfall. ...read more.

Good use of a lot of appropriate terminology. Quite well structured essay, though the content within this needs attention. There is a lack of understanding of the exact human and physical factors involved. Some are mentioned and the details of how they relate to this specific location are given. However, actually comparing and contrasting their relative importance is needed with more detail and clarity to fully address the title. The vague conclusion is evidence of this.