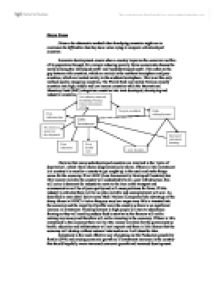 Discuss the alternative methods that developing countries might use to overcome the difficulties that they have when trying to compete with developed countries.

Geryn Evans Discuss the alternative methods that developing countries might use to overcome the difficulties that they have when trying to compete with developed countries. Economic development occurs when a country improves the economic welfare of its population through, for example reducing poverty. Some economists discuss the world as being the 'developed north' and 'underdeveloped south'. This refers to the gap between rich countries, which are mainly in the northern hemisphere and poor countries, which are located mainly in the southern hemisphere. This is not the only method used to categorise countries, The World Bank and United Nations classify countries into high, middle and low income countries while the International Monetary Fund (IMF) categorises countries into least developed, developing and industrial countries. I believe that many underdeveloped countries are involved in the 'cycle of deprivation', which I have shown diagrammatically above. If there is little investment in a country it is easy for a country to get caught up in the cycle and make things worse for the economy. If an LEDC (Less Economically Developed Countries) has little money available the country will undoubtedly have a poor infrastructure, this will act as a deterrent for industry to move to the area as the transport and communication will be of poor quality and will cause problems for firms. If little industry is attracted there will be no jobs available and unemployment will soar. As described in more detail below some Multi National Companies take advantage of the cheap labour in LEDC's but as they pay very low wages very little is invested into the economy and the majority of profits leave the country so there is no significant increase in investment. ...read more.

This increase production by the UK farmer means their costs are lower more than the Bangladeshi farmer so demand for UK crops will increase and demand for Bangladesh crops will decrease as consumers will switch to the cheaper substitute. This will result in less Bangladesh crops being bought, therefore making the Bangladeshi farmers less competitive in the global economy. UK crops Indian crops Price Price Quantity Quantity It is not all 'doom and gloom' however for developing countries which are trying to compete globally. There are a number of policies, which can be used to promote development and to increase the countries competitiveness on a global scale. Increasing agricultural productivity- This policy has often been overlooked in the past because of the income inelastic demand for food and the volatility of supply. However, increasing productivity in agriculture, as part of a development strategy, can stimulate demand for manufactured products like tractors. With this new technology farmers will be able to increase their yields as they become more productive and as their costs are reduced they will become more competitive. A firms costs will fall as they become more productive as they spread their overheads over a larger volume of output, resulting in reduced unit costs. Export-orientated industrialisation- Involves an outward orientation of development, opening up the country to international trade by removing trade barriers. The thinking is that the increased competition from industrial countries will force the developing country's firms to become more efficient. ...read more.

This policy can be a successful method of increasing development if the strategies are planned correctly. If money is spent unwisely as was the case in Brazil and Mexico problems can occur which will devastate the economies and will stunt development. Applying for foreign aid - can assist development if it is used in high productive projects which take into account the resource endowment of the country. Untied aid is thought to be more beneficial than tied aid. The latter requires the recipient to buy goods and services from the donor country. The World bank and IMF (International Monetary Fund) provide loans to developing countries designed to improve their infrastructure, education and health services, restructure the economy and cope with aggregate supply and demand shocks. I feel that this policy can once again either greatly benefit a country if it is used wisely or it can create even more problems for the economy. To conclude I feel that it is very difficult for developing countries to compete globally with developed countries as they are at a disadvantage in many respects. I feel that the best way to increase the competitiveness of developing countries is to increase the development in the countries and to increase investment and this often requires external assistance. I feel that developing countries can overcome the disadvantages they face by successfully planning and using some of the policies mentioned above. The third world should not be alienated but welcomed into the global market, and only then will they not feel so daunted by the prospect of competing with the superpowers of the industrial world. ...read more.