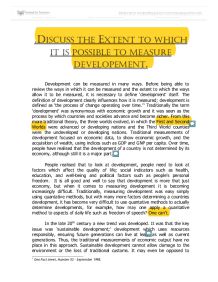 Discuss the Extent to which it is possible to measure developement.

.DISCUSS THE EXTENT TO WHICH IT IS POSSIBLE TO MEASURE DEVELOPEMENT. Development can be measured in many ways. Before being able to review the ways in which it can be measured and the extent to which the ways allow it to be measured, it is necessary to define 'development' itself. The definition of development clearly influences how it is measured; development is defined as 'the process of change operating over time.'1 Traditionally the term 'development' was synonymous with economic growth and it was seen as the process by which countries and societies advance and become richer. From this more traditional theory, the three worlds evolved, in which the First and Second Worlds were advanced or developing nations and the Third World counties were the undeveloped or developing nations. Traditional measurements of development focused on economic data, to show economic growth, and the acquisition of wealth, using indices such as GDP and GNP per capita. Over time, people have realised that the development of a country is not determined by its economy, although still it is a major part. ...read more.

A modern definition of development such as Todaro's 'process of improving the quality of all human lives; has three main elements:2 1. Raising people's living standards. Their incomes, consumption levels of food, medical services, education etc, through relevant economic growth processes. 2. Raising people's self-esteem through the establishment of social, political and economic systems and institutions that promote dignity and respect. 3. Increasing people's freedom by enlarging the range of their choices, e.g. varieties of consumer goods. Development is clearly a complex and wide ranging process involving cultural, economic, environmental, social and technological change. It is extremely difficult to measure. The analysis of a wide range of variables is needed to provide useful information used to determine development. This process is called the 'multivariate analysis.' Many measures of development have being created, other than the multivariate analysis; others include 'Development Indices' or 'The Quality of Life Indices' All the different measurements of development require huge amounts of research. If for example I would like to know how developed Tanzania is, I would have to look at its Life expectancy at birth, Daily food consumption, Adult literacy rate, Energy consumption, education policies, health policies, quality of life, social justice, personal wealth, birth and death control, not to mention political factors such as the type of government. ...read more.

Subsistence farming does not count towards the GNP, as it is not sold, so, although a great amount of food is produced, it does not count towards a countries GNP, as it is not sold. This means that even the traditional economic measure of development is unreliable. Bottom of Form Although there are many ways of measuring development, no monitors are actually able to answer such important questions as: Is development designed to meet people's basic needs? Or should development take into account the environment? What measuring development does do however is enable researchers to make comparisons both spatially and over time in order to encourage greater understanding of the development. Sadly at the moment there is no indices which can successfully measure development. Although there are ways of measuring factors which contribute to development, there is no way to measure development as a whole for a given country. In conclusion, development can only be measured to the extent at which there is enough reliable data to work with. The task for the future will be to devise indices which measure successful sustainable development in all aspects of economic activity. Word count: 972 1 Geo Fact sheet, Number 52 - September 1998. 2 Geo Fact sheet, Number 52 - September 1998. ALEX DAY HL GEOGRAPHY 9/1/2003 ...read more.

This answer shows a good understanding of the difficulties in measuring the level of development in a country. However, it is very one-sided. The command is to "discuss the extent to which" it is possible to measure development - the best answers would consider the argument that it may be possible in some ways to measure development (even if the final conclusion is against the idea). It is likely that examiners would expect the answer to explain how HDI and similar indices work, perhaps with some reference to the actual outcomes showing which countries have the highest and lowest levels of development. The point could also be made that although no single index is perfect, when countries consistently appear in the top or bottom of several rankings, it probably does tell us something about actual development levels.