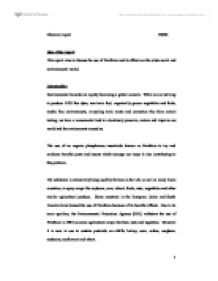 Discuss the use of Parathion and its affects on the wider social and environmental world.

Chemical report 95806 Aim of the report This report aims to discuss the use of Parathion and its affects on the wider social and environmental world. Introduction Environmental hazards are rapidly becoming a global concern. While we are striving to produce AZO free dyes, non toxic fuel, organically grown vegetables and fruits, smoke free environments, re-cycling toxic waste and cosmetics free from animal testing; we have a monumental task to relentlessly preserve, restore and improve our world and the environment around us. The use of an organic phosphorous insecticide known as Parathion to try and eradicate harmful pests and insects which scourge our crops is also contributing to this problem. The substance is extensively being used by farmers in the US, as well as many Asian countries, to spray crops like soybean, corn, wheat, fruits, nuts, vegetables and other similar agricultural produce. Some countries in the European Union and South America have banned the use of Parathion because of its harmful effects. Due to its toxic qualities, the Environmental Protection Agency (EPA) withdrew the use of Parathion in 1992 on some agricultural crops like fruit, nuts and vegetable. ...read more.

Issues surrounding exposure of Parathion to humans The World Health Organisation has classified Parathion as hazardous and in a draft and safety guide mentioned "there are more reported cases of poisoning with Parathion than with any other pesticide currently in use". (http://www.fao.org/docrep/W5715E/w5715e05.htm) Contact with Parathion through the skin or the mucous membrane (ingesting) will cause respiratory discomfort, coughing up blood, vomiting, abdominal cramps, diarrhoea, rapid perspiration, dizziness, constricted or dilated pupils, slurring of speech, trembling (seizures similar to epilepsy), weakness, fatigue, loss of bodily functions and irregular heartbeat. Eventually the person to slide into semi unconscious state or coma, leading to a fatal outcome, if the person is not treated promptly. When ingested orally or through the skin and mucous membrane, Parathion is metabolized to Paraxon. Paraxon causes the oxygen to be replaced by the sulphur atom in the blood stream. The presence of sulphur in the metabolism, gave rise to myriad symptoms mentioned above. Red Blood Cells and plasma activity have been reduced considerably, when humans are exposed to Parathion. Poison absorbed by the human metabolism is retained in the system for prolonged length of time. ...read more.

It is imperative to avoid leakages, while transporting from city to city or across the country. Transportation of chemicals is also a critical process - annually, many accidents occur while transporting chemicals from one place to another. Parathion must be transported placed or stored in properly labelled and leak proof containers, and must be kept away from containers of food and drinks. Drinking, eating and smoking in the laboratory must be banned and washing hands made mandatory after handling them. Washing facilities should be adequate enough and must be available every time throughout handling and must be made close to the place of handling of compounds. Disposal Parathion containers should either be burned or crushed and buried below topsoil. Extra care should be taken to avoid later pollution of water sources. Cleaning of containers in order to utilize them for other purposes must not be allowed. Containers and urns carrying any poisonous and hazardous material, like the Parathion chemical must be discarded properly after use. Either the drums must be burned in an incinerator or buried deep, under the earth. Toxic waste should be discarded with care, in the chosen areas. Any traces of waste found seeped in water or dumped in open spaces of land, will give rise to contamination of marine life and wild life. ...read more.