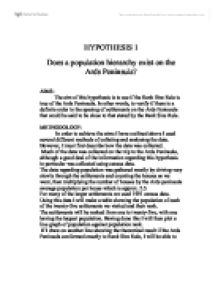 Does a population hierarchy exist on the Ards Peninsula?

HYPOTHESIS 1 Does a population hierarchy exist on the Ards Peninsula? AIMS: The aim of this hypothesis is to see if the Rank Size Rule is true of the Ards Peninsula. In other words, to verify if there is a definite order to the spacing of settlements on the Ards Peninsula that could be said to be close to that stated by the Rank Size Rule. METHODOLOGY: In order to achieve the aims I have outlined above I used several different methods of collating and analysing the data. However, I must first describe how the data was collected. Much of the data was collected on the trip to the Ards Peninsula, although a good deal of the information regarding this hypothesis in particular was collected using census data. The data regarding population was gathered mostly by driving very slowly through the settlements and counting the houses as we went, then multiplying the number of houses by the Ards peninsula average population per house which is approx. 2.5. For many of the larger settlements we used 1991 census data. Using this data I will make a table showing the population of each of the twenty-five settlements we visited and their rank. The settlements will be ranked from one to twenty-five, with one having the largest population. Having done this I will then plot a line graph of population against population rank. If I draw on another line showing the theoretical result if the Ards Peninsula conformed exactly to Rank Size Rule, I will be able to compare these two lines and should be able to see whether or not my hypothesis is correct, and if so to what extent. For the theoretical basis regarding Rank Size Rule see following page. PROBLEMS: The main problem we faced regarded calculating population of the smaller settlements. The method of counting the houses and then multiplying by the average number of people per house which theoretically should be living there, is very inaccurate. ...read more.

Using the Spearman's Rank Test I found the strength of the correlation between the two hierarchies. I was able to represent the data on a map, which made it easier to see the similarities and differences between the Centrality Index and population of the settlements on the Peninsula. Now I can say there is a direct correlation between Centrality Index and population. In other words that as the population of a settlement increases, the Centrality Index will increase, because there will be enough demand to sustain more shops and services. This sub-hypothesis has also shown me that some settlements do not provide lots of services for the population due to other settlements with a greater number of services being near by. This will be investigated further on in my investigation. HYPOTHESIS 4 "Do people travel further for higher order goods?" AIMS: My main aim for this sub-hypothesis is to find out if people do travel further for higher order goods using the example of people in Portaferry. METHODOLOGY: Before I investigated if people travel further for higher goods or not, I had to find out where people purchase items such as bread, televisions etc. To do this, our group set about a questionnaire (shown on following page). Once all 28 surveys had been completed we added them to give us overall results of where people go to buy different goods and how often they would visit some of the much larger settlements, which are considerable distances from Portaferry. Once the data was added we took percentages for reasons stated in the 'problems' section. PROBLEMS: The main problem concerning the questionnaire was that not all of our results added up to 28, as they should have done. The reasons for this were quite straightforward, in that some of the people surveyed gave more than one answer to the questions. For example, they didn't have a car, they ate out or bought bread in more than one place. ...read more.

MAIN HYPOTHESIS EVALUATION "THERE IS A HIERARCHY OF SETTLEMENT ON THE ARDS PENINSULA" In this project, having split the main hypothesis into six sub-hypotheses, and I believe that I have now proved it to a satisfactory standard. The results I achieved for many of the hypotheses, while often inaccurate and rather simplified, do give reasonable ideas of the geography of the Ards Peninsula and the people who live there. I believe that I have proven several pieces of geographical theory to be true of the Ards Peninsula, especially Breaking Point Theory, but also, to a lesser extent the Rank Size Rule. It must be said that the way in which data was collected for this hypothesis does mean that some of the results are slightly inaccurate to say the least, and furthermore, for several of the sub-hypotheses only a small sample of settlements was taken. This in itself means that for these sub-hypotheses, the results perhaps did not reflect the overall picture for all the settlements on the Ards Peninsula. Despite all of these problems, I believe that I achieved my aims and undoubtedly developed a greater understanding of various geographical theories mentioned in this project. In conclusion, I believe I completed this project, achieving a reasonable idea of the geographical processes and to the best of my ability. GLOSSARY * SETTLEMENT HIERARCHY: This term refers to the arrangement of settlements within a certain area in "order of importance". * SPHERE OF INFLUENCE: The area served by a particular settlement, it depends on the size and functions of a settlement. * MATRIX: A grid onto which we put the range of services of each settlement with the aim of calculating their Centrality Index. (see appendix) * CENTRALITY VALUE: The number of points awarded to each service depending on how common they are. Calculated by dividing 100 by the total number of a particular service. * CENTRALITY INDEX: How "important" a particular settlement is, based on the number and range of services provides. Calculated by multiplying the Centrality value of each service by the number of that service there are in the settlement. ...read more.