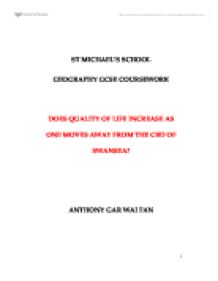 Does quality of life increase as one moves away from CBD of Swansea?

ST MICHAEL'S SCHOOL GEOGRAPHY GCSE COURSEWORK DOES QUALITY OF LIFE INCREASE AS ONE MOVES AWAY FROM THE CBD OF SWANSEA? ANTHONY GAR WAI FAN TABLE OF CONTENTS INTRODUCTION DATA COLLECTION & ANALYSIS OF RESULTS CONCLUSION REFERENCES APPENDICES INTRODUCTION As cities have grown in area and population in the 20th century, geographers and sociologists have tried to identify and to explain the variations in spatial patterns. One of the earliest urban models to attempt to do this is the Burgess model, this was based upon Chicago in USA, as seen below. The model is made up of five zones, 1. In the centre the Central business district (CBD) that contains the major shops and offices; it is the centre for commerce and entertainment, and the focus for transport routes. 2. The second zone is the twilight zone, which is where the oldest buildings are the inhabitants tend to be poorer. 3. The third zone is the low-class housing zone, which is occupied, by those who have moved out of zone two, and in Britain this zone is known as the inner city. 4. The fourth zone is made up of medium housing of higher quality which is usually include inter-war private semi-detached houses and council estates. 5. While the fifth and final zone is occupied by expensive properties and this zone is called the commuter zone. The Burgess Model Having looked at the Burgess model, it is fair to assume that the quality of life increase from zone one to zone 5. For the purpose of this project an assessment of whether the quality of life increase as one moves away from the CBD of Swansea, as illustrated in figure 1. The City of Swansea is located in South Wales with a population of approximately 250,000. The reasons for choosing Swansea as my place of study is because I live in this city and would like to see if Swansea conforms to the Burgess model. ...read more.

This can be the result of many reasons, firstly the Burgess model in which the hypothesis was based upon like all models there are limitations. The main criticisms of the Burgess model is that is over simplified and the model is specific to one place and one period of time, i.e. Chicago, USA in the 1920s. It does not take into consideration of some factors which did not exist when the model was first out forward. These factors can be car growth, the swallowing up of small villages by urban growth, the redevelopment of inner city areas and the relocation of shopping, industry and office accommodation. All these above factors would no doubt influence the urban structure and therefore in turn the quality of life structure in Swansea. It can be clearly seen from the analysis of the data that the quality of life in Swansea varies throughout. There also seems to be an east and west divide in terms of quality of life. For example, one of the areas which was looked at in detail was St. Thomas which had a poor quality of life is located in the east, while in the west, the area also looked at in detail was Newton which had a high quality of life. This maybe as a result of the location of the main lines of communication, where this is present the quality of life is poor. Hence that St. Thomas has a poor quality of life since it is immediately in the vicinity of the main entrance and exist of Swansea, the A483. Another example of this is the area of Gorseinon, which is located next to the other end of the A483, which has a poor quality of life. However Newton is in no close proximity of any main line communications as represents a very high level of quality of life. Having said this it might be appropriate to suggest that Swansea urban structure is quite similar to the Hoyt Model, which does incorporate the feature of main line communications, see appendix. ...read more.