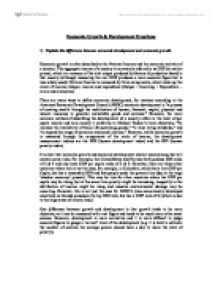 Economic Growth & Development Questions 1) Explain the difference between economic development and economic growth. Economic growth is often described as the National Income and the economic activity of a country. This aggregate income of a country is commonly referred to as GDP (at market prices), which is a measure of the total output produced by factors of production based in that country (although measuring the real NNP produces a more accurate figure but is less widely used). National Income is measured by three components, which make up the circle of income; Output, income and expenditure (Output = Incoming = Expenditure - errors and omissions). There are many ways to define economic development, for instance according to the American Economic Development Council (AEDC) economic development is "a process of creating wealth through the mobilisation of human, financial, capital, physical and natural resources to generate marketable goods and services." However, the more common method of describing the development of a country refers to the level of per capita income and how closely it conforms to Michael Todaro's three objectives; "To increase the availability of basic life-sustaining goods," "to raise living standards," and "to expand the range of economic and social choices." ...read more.

or by taking into account the income distribution of a country (seeing whether the GNP is high due to a few wealthy people or a general sense of affluence). It is also necessary to take into account errors and omissions and the 'real' value of the GNP measurement, as the raw figure may be distorted and even change over a time scale (e.g. the GNP measurement now would differ of that from 50 years ago). Moreover, the errors and omissions do not just include calculation factors, but also physical elements, for example, the geography & climate of the region (for example, the broader the area that a country's population inhabits, the more of GNP that will be taken up by the cost of transportation.) Economists would also, as stated before, take into account the income distribution of a country in their GNP measurement, and to do this, they would use the 'Lorenz Curve' and the Gini Co-efficient formula. This formula from the graph can emphasise the distribution, where the closer to result to 0 (and the diagonal line on the graph), the closer to perfect equality the country, whereas an outcome close to 1 shows a high level of inequality. ...read more.

in Bangladesh) where a family may work on the land and produce output just for themselves, rather than for income. Women in the role of 'housewives' conform to this too as they perform a service (e.g. through cooking and cleaning e.t.c) but this is not officially counted as output and they generally do not get paid (often the case in some Middle Eastern & Islamic countries). The problem with the PQLI and the HDI are both broad and limited. Although they measure such factors as maternal health, quality of prenatal care, nutrition levels, sufficiency of healthcare & access to a safe water supply, they fail to take into account indices such as: security & political freedom (which is lacking in some countries such as Russia, Kazakhstan & China), human rights and employment. Therefore, the problem with the PQLI and the HDI is that these indexes do not try to measure freedom, justice and security, but instead they attempt to measure how well people satisfy certain life-serving social characteristics. These indexes are also considered to be normative, and thus not an exact science. Hence, it is difficult to judge accurate figures for factors such as sufficiency of health care per person, as this may differ over time and between countries also. ...read more.