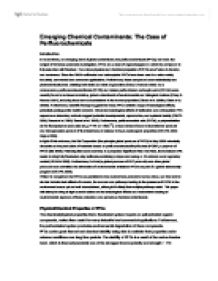 Emerging Chemical Contaminants: The Case of Perfluorochemicals Introduction In recent times, an emerging class of global contaminant, the perfluorochemicals (PFCs), has been the subject of immense worldwide investigation. PFCs are a class of organohalogens in which the compound is fully saturated with fluorines. The unique physical and chemical properties of PFCs are of value in industry and commerce. Since the 1950's sulfonated and carboxylated PFCs have been used in a wide variety industrial, commercial and consumer applications. Furthermore, these compounds are metabolically and photochemically inert, resisting both biotic and biotic degradation (Giesy & Kannan 2002). As a consequence, perfluorooctanesulfonate (PFOS) and related perfluorinated carboxylic acids (PFCAs) were recently found to be bioaccumulative, global contaminants of environmental and biological matrices (Giesy & Kannan 2001), including trace level concentrations in the human population (Olsen et al. 2003a; Olsen et al. 2003b). Furthermore, scientific findings suggest that many PFCs exhibit a range of toxicological effects, potentially posing public health concerns. Observed toxicological effects of sulfonated and carboxylated PFC exposure on laboratory animals suggest potential developmental, reproductive, and systemic toxicity (OECD 2002; Seacat et al. 2002; Seacat et al. 2003). Furthermore, perfluoroocatnic acid (PFOA), a polymerisation aid for fluoropolymer production (E.g. PTFE or TeflonTM), a trace residual found in fluorotelomer products and biodegradation product of fluorotelomers, is believed to have carcinogenic properties (US EPA 2002; Hogue 2005). In light of this evidence, the 3M Corporation (the principle global producer of PFCs) in May 2000 voluntarily discontinued the production of materials based on perfluorooctanesulfonyl fluoride (POSF), a polymer of PFOS (3M 2000). Following this announcement, in a proposed Significant New Use Rule, the American EPA seeks to bring fully fluorinated alkyl sulfonate-containing compounds having 4-10 carbons under regulatory control (US EPA 2000). Furthermore, DuPont (a global producer of PFC products) and other global producers are committed the elimination of environmental emissions PFOAs as part of a global stewardship program (US EPA 2006). ...read more.

It has been well documented that the manufacturing processes constitutes a major source for PFOS to the local environment. PFC concentrations have been found to be greater in biota situated closer to industrialised areas. During the ECF process, various waste products containing PFOS based substances are released into the atmosphere or into wastewater treatment systems, as well as by products. These by products can be recycled in the product manufacturing process or discharged into controlled, in-house waste water treatment systems. The resulting treatment sludge is landfilled (3M 2000). High local emissions are supported by one study that has showed extremely high concentrations of PFOS in wood mice collected in the immediate vicinity to 3M's fluorochemical plant in Antwerpen, Belgium (Hoff et al., 2004). Another study reported that concentrations of the measured fluorochemicals increased downstream of a fluorochemical manufacturing facility, indicating that effluent from manufacturing is one likely source of organic fluorochemicals into the aquatic systems (Hansen et al. 2002). It is also possible that volatile precursors that can degrade to PFOS and PFOA such as sulfonamides and FTOHs, could escape from the production facilities during the manufacture of PFC products. Given the wide range of products containing PFOS and PFOA, sources other than manufacture could result in emissions to the environment. These include leachates from landfills, atmospheric losses for combustion and commercial uses, wash-offs from fire fighting foams, and wash-offs from PFC treated products such as textiles (DEFRA 2004). Furthermore, PFOS itself has been measured in the original formulation of the commonly used textile stain protectant ScotchGardTM. Presumably, PFCs applied to textiles that are washed can be incorporated into residential wastewater streams. In addition, PFOS an PFOA containing fire fighting foams can be used in significant quantities in airports and training facilities and has been known to contaminate nearby surface and groundwaters. PFOA was found to be at a concentration 120 �g/L in groundwater in the vicinity of a fire-training area, ten years after contamination (Moody et al. ...read more.

2003b). No clear association between human exposure to PFCs and adverse health effects has been established. Olsen et al. (1999) found no association with occupational exposure to PFOS and toxicological effects. However, on the basis of the following results from animal studies a potential risk could exist for developmental and other adverse effects associated with exposures to PFCs in humans. Evidence of the toxicity of PFOS and PFOA is available from chronic to acute exposures to rats and monkeys. The most relevant studies are outlined. Subchronic exposure to PFOS in rodents and primates results in adverse health effects, including reduction of body weight, liver hypertrophy, and decreased serum cholesterol. Furthermore, exposure to PFOS during pregnancy in rats results in maternal and developmental toxicity. Specifically, significant reductions of maternal weight gains and a marked decrease in circulating thyroid hormones in a dose-dependent manner were observed in pregnant rats exposed to PFOS. The altered thyroid hormone metabolism, also detected in cynomolgus adult monkeys exposed to PFOS, is of potential concern because thyroid hormones regulate growth, metabolic rate, cardiac performance, and body temperature, and play a critical role in the normal development of the lung, inner ears, and nervous system. PFOS exposure may impair functionality in target organs such as the liver. The PFOS-exposed rat and mouse fetuses displayed a variety of birth defects. Furthermore, in utero exposure to PFOS in rats increased post-natal mortality (OECD 2002). Significantly, Ten years of employment in PFOA production jobs was associated with a 3.3-fold increase in prostate cancer mortality, compared with no employment in PFOA production jobs, although only six prostate cancer deaths occurred overall and four among the exposed workers (US EPA 2002). In a two-year cancer study conducted by 3M, PFOA doubled the incidence of mammary tumours in exposed laboratory animals (Hogue 2005). Summary Sulfonated and carboxylated perlfuorinated compounds fulfil the persistant organic pollutant (POP) criteria specified by the Stockholm Convention. Since 3Ms discontinuation of pefluorinated chemistries, these compounds have been given worldwide concern. The scenario of the perfluorochemicals, brings to light how imprudent industrial and commercial imperatives can override environmental and health considerations. ...read more.