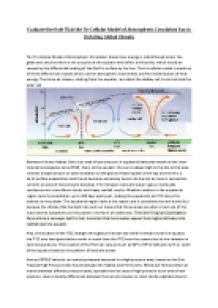 ﻿Evaluate the Role That the Tri-Cellular Model of Atmospheric Circulation has in Dictating Global Climate The Tri-Cellular Model of Atmospheric Circulation shows how energy is redistributed across the globe and ensures there is not a surplus at the equator and deficit at the poles, which would be caused by the differential heating of the Earth?s surface by the Sun. The tri-cellular model is made up of three different air masses which control atmospheric movements and the redistribution of heat energy. The three air masses, starting from the equator, are called the Hadley cell, Ferrel cell and the polar cell. Between the two Hadley Cells is an area of low pressure in equatorial latitudes known as the inter-tropical convergence zone (ITCZ). Here, at the equator, the sun is always high in the sky so this area receives a large amount of solar insolation so the ground heats rapidly in the day and there is a lot of surface evaporation and the air becomes extremely humid. ...read more.

The location of the ITCZ can vary as much as 40° to 45° of latitude north or south of the equator based on the pattern of land and ocean. Around 30°N/S latitude, air carried poleward descends in a high pressure area, known as the Sub Tropical High Pressure belt; found between the Hadley and Ferrel cells. Winds are formed when air moves between different pressure belts, typically from an area of high pressure to an area of low pressure, due to density differences between the two air masses, so most winds originate close to the Sub Tropical High Pressure belt. Winds are generated between the subtropical high and the equatorial band of low pressure creating the trade winds. However due to the spinning of the earth these winds will not move straight from the differing areas of pressure. These will be diverted to either the left or right, depending on whether they are travelling North to South or South to North. ...read more.

In the Ferrel Cell part of the Global Atmospheric Circulation model the prevailing winds are westerlies but large low pressure circulation systems are common. Local wind directions can be quite variable, depending on the proximity of such systems, but the weather itself tends to move in a broadly west to east direction. This is why the weather experience in the UK, for example, is often much different from that in Russia. In the UK, the weather comes from the Atlantic Ocean; in Russia it comes from Central Europe. Between the Polar and Ferrel Cells there are the Sub Polar Low Pressure zones where warm air from the high pressure areas, clashes with the colder air coming from the equator. The cold front will bulldoze under the warmer air forces it upwards. This makes the air cool and also causes frontal rain. The climate of this area is quite temperate but is also quite dominated by the frontal rain. There are however, several factors, other than the Global Atmospheric Circulation Model, that effect global climate. ...read more.