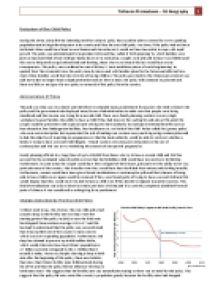 ﻿Yathavan Premadasan ? AS Geography Evaluation of One Child Policy During the 1970s, China felt the indenting need for a drastic policy that would be able to control its ever-expanding population and to begin development in its country and thus the one child policy was born, if the policy had not been instituted china would have faced severe famine and starvation as it would not have been able to cope with rapid growth. The policy was administrated in September 1981 and they called it ?birth planning? by which families were given a maximum limit of one child per family however in rural areas, couples were allowed to have two children and this was to help need on agricultural land and farming; those who try to breach this law would face severe consequences. The policy was considered as one of history?s ?most ambitious pieces of social engineering? as quoted from The Economist since the policy heavily intervened with families plans for the future and affected how most chines families would function in terms of having children. The policy governed by the Chinese government was said not to last no longer than a single generation and yet here in 2013, the policy still continues to proceed and there are little or no signs of a new policy or removal of this policy from the country. Administration Of Policy The policy in china was very drastic and therefore it contained many punishments for anyone who tried to breach the policy and the government also deployed many forces of administration to make sure that people were being monitored and that no one was trying for a second child. ...read more.

The rapid fall in fertility rate just before the one child policy is clearly shown in the graph that is on the previous page; the graph was taken from the GapMinder webpage which holds information about the world demographic and thus is very reliable. Another negative impact of the one child policy was a case of female infanticide. In fact, this is an interesting concern as it has lead to china presenting a population where there are about 120 Chinese men for every 100 Chinese women and thus there is a shortage of women. There was a severe amount of female infanticide for several reasons. Firstly a male child was seen as more superior for the use on farmland and for the use on agricultural land as men were seen as stronger characters compared to women. Secondly, only the male would be able to carry forward the family name and in China there was a great cultural desire to carry forward a family name to keep the family advancing through generations. Finally, men are usually the main income-earners, either because they are more employable or earn higher wages for the same work, or because they are able to do more agricultural work in subsistence economies. Since male babies have a greater income potential, they are more desired over females and thus female births were usually abandoned or killed. There are some stories of extreme discomfort where female babies have been flushed down toilets and drowned, as they were not considered valuable to Chinese family. ...read more.

there would not be effects one some females lives who have been sterilized permanently after the birth of the first child because this would prevent the mother from having another child ever. Also, the Chinese government are now unable to scrape the policy because they have not alternatives that could be administrated on the scale of the one child policy and therefore the government suggests ?we will stick to the family-planning policy for decades? and this implies that the removal of the policy would have a considerate difference on China?s population and that it could possibly improve the gender imbalance which is not of great interest to china as demographers suggest the removal of the policy would suggest a rapid increase in population once again and this would mean that the country would not be able to achieve its goal which is to become a well developed country with a high GDP. The charts below show what would happen to china?s population and its structure by 2050 if the policy was to be removed and as the first graph clearly suggests, the one child policy has been heavily successful in maintaining a smaller population and emphasis should be placed on the fact it is just a smaller population. Although, the population is smaller the structure of the population between men and women and groups of elderly, working class as well as those under 15 is highly imbalanced and as the chart on the right clearly imposes, if the policy was removed the demographic structure will become more balanced once again. ...read more.