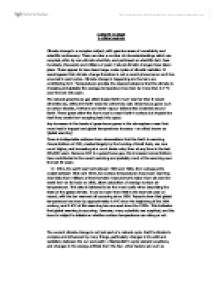 CLIMATE CHANGE A critical analysis Climate change is a complex subject, with genuine areas of uncertainty and scientific controversy. There are also a number of misunderstandings which are recycled, often by non-climate scientists, and portrayed as scientific fact. Over hundreds, thousands and millions of years 'natural climatic changes have taken place. There appear to have been large- scale cycles of climatic variation. It would appear that climate change therefore is not a recent phenomenon as it has occurred in past cycles. Climate change is happening and humans are contributing to it. Temperatures provide the clearest evidence that the climate is changing and globally the average temperature has risen by more than 0.7 �C over the last 100 years. The natural greenhouse gas effect keeps Earth much warmer than it would otherwise be, without it Earth would be extremely cold. Greenhouse gases such as carbon dioxide, methane and water vapour behave like a blanket around Earth. These gases allow the Sun's rays to reach Earth's surface but impede the heat they create from escaping back into space. Any increases in the levels of greenhouse gases in the atmosphere mean that more heat is trapped and global temperatures increase - an effect known as 'global warming'. ...read more.

The ice ages are good examples of global changes to the climate, and warm periods have seen grapes grown across much of Britain. Over the several hundred thousand years covered by the ice core record, the temperature changes were primarily driven by changes in the Earth's orbit around the Sun. Over this period, changes in temperature did drive changes in carbon dioxide (CO2). Since the Industrial Revolution (over the last 100 years), CO2 concentrations have increased by 30% due because to human-induced emissions from fossil fuels. The bottom line is that temperature and CO2 concentrations are linked. In recent ice ages, natural changes in the climate, such as those due to orbit changes, led to cooling of the climate system. This caused a fall in CO2 concentrations which weakened the greenhouse effect and amplified the cooling. Now the link between temperature and CO2 is working in the opposite direction. Human-induced increases in CO2 are driving the greenhouse effect and amplifying the recent warming. One of the arguments from scientists who do not accept global warming is happening, say that while surface records may show that temperatures on the earth's surface are rising, satellite temperature records are unable to detect any warming occurring higher up in the troposphere. ...read more.

Computer models cannot predict the future exactly, due to the large number of uncertainties involved. The models are based mainly on the laws of physics, but also empirical techniques which use, for example, studies of detailed processes involved in cloud formation. The most sophisticated computer models simulate the entire climate system. As well as linking the atmosphere and ocean, they also capture the interactions between the various elements, such as cryosphere (ice) and geosphere (land). Climate models successfully reproduce the main features of the current climate (e.g. rainfall in the map below), the temperature changes over the last 100 years, the Holocene (6,000 years ago) and Last Glacial Maximum (21,000 years ago). Current models enable us to attribute the causes of past climate change, and predict the main features of the future climate, with a high degree of confidence. We now need to develop the models to provide more regional detail of the impacts of climate change, and a more complete analysis of extreme events. Some scientific studies suggest that global warming is happening whilst others say it is not, with all the evidence I have come to the conclusion that climate change is happening but do to natural causes, humans however, are speeding this process up. ...read more.