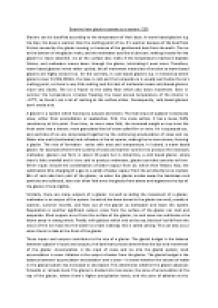 Examine how a glacier operates as a system (25)

ï»¿Examine how glaciers operate as a system. (25) Glaciers can be classified according to the temperature of their base. In warm based glaciers e.g. the Alps, the base is warmer than the melting point of ice. It’s warmer because of the heat from friction caused by the glacier moving, or because of the geothermal heat from the earth. The ice at the bottom of the glacier melts, and the meltwater acts like a lubricant, making it easier for the glacier to move downhill. Ice at the surface also melts if the temperature reaches 0 degrees Celsius, and meltwater moves down through the glacier, lubricating it even more. Therefore, warm based glaciers move rather quickly, lots of movement means lots of erosion so warm based glaciers are highly erosive too. On the contrary, in cold based glaciers e.g. in Antarctica where glaciers cover 13,586,380km, the base is cold and the temperature is usually well below the ice’s melting point, so there’s very little melting and this lack of meltwater means cold based glaciers move very slowly. The ice is frozen to the valley floor which also slows movement. Even in summer the temperature is below freezing, the mean annual temperature of the interior is −57°C, so there’s not a lot of melting at the surface either. Consequently, cold based glaciers don’t erode a lot. A glacier is a system which has inputs, outputs and stores. ...read more.

These inputs and outputs contribute to the size of a glacier. The glacial budget is the balance between a glacier?s inputs and outputs, the dominant process determines the size and movement of the glacier. Accumulation is the input of snow and ice into the glacial system; most accumulation is snow. Ablation is the output of water from the glacier. The glacial budget is the balance between accumulation and ablation over a year ? it shows whether the volume of water in the glacial system has increased or decreased. This determines whether the glacier advances forwards or retreats back. The glacier is divided into two zones, the zone of accumulation at the top of the glacier, where there?s higher precipitation levels, and the zone of ablation at the bottom where melting and sublimation of glacier ice occurs. The place where accumulation and ablation are equal are equal is called the equilibrium point. If there?s more accumulation than ablation over a year, the glacier has a positive regime (or a positive mass balance). If this occurs then the glacier grows and advances forwards, eroding the valley as it progresses and meanwhile depositing moraine/lodgement till (material deposited by an advancing glacier). Despite an advancing glacier eroding and depositing, eroding is a more significant process and an advancing glacier tends not to deposit a lot in comparison. Glaciers erode the valley floor and sides by plucking and abrasion. ...read more.

When it is down the valley away from the glacier it?s not a store in the glacier any more. Finally, glaciers carry debris (rocks, gravel and sand) which are considered a store within the system. There are many processes within a glacier, which either erode or deposit material, or create movement within the glacier, affecting its position and shape. Basal sliding occurs with an abundance of meltwater, so it?s a more common process in temperate regions, with warm based glaciers e.g. the Alps. It?s an external process by which meltwater lubricates the base and the glacier slides over the valley. Similarly, regelation occurs because of meltwater. At a rock outcrop on the valley floor, pressure melting occurs against the rock and meltwater is created, enabling basal sliding. When the water reaches the other side of the outcrop, there?s less pressure therefore lower temperature and thus the water refreezes, this melting and refreezing is called regelation. Laminar flow is an internal movement whereby layers of internal ice slide over one another, this contributes to a high percentage of movement in cold based glaciers since there?s less basal sliding. As well as layers of ice sliding over each other, ice crystals within the glacier do the same process, but with ice crystals the process is called intergranular flow. Furthermore when an ice crystal splits and the two halves slide over each other, this is called intragranular flow. All these processes cause the glacier to move and if the glacier is moving it?s changing shape and eroding the landscape. ...read more.