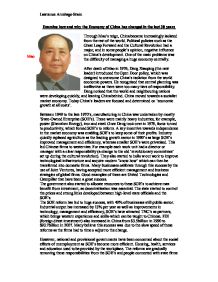 Examine how and why the Economy of China has changed in the last 30 years Through Mao's reign, China became increasingly isolated from the rest of the world. Political policies such as the Great Leap Forward and the Cultural Revolution had a major, and in some people's opinion, negative influence on China's development. One of the main problems was the difficulty of managing a huge economy centrally. After death of Mao in 1976, Deng Xiaoping (the new leader) introduced the Open Door policy, which was designed to overcome China's isolation from the world economic powers. He recognised that central planning was ineffective as there were too many tiers of responsibility. Deng noticed that the world and neighbouring nations were developing quickly, and leaving China behind. China moved towards a socialist market economy. Today China's leaders are focused and determined on 'economic growth at all costs'. Between 1949 to the late 1970's, manufacturing in China was undertaken by mostly 'State-Owned Enterprise (SOE's). These were mainly heavy industries, for example, power (Shenzhen Energy), iron and steel. Once Deng took over in 1978, focus turned to productivity, which forced SOE's to reform. A key incentive towards independence in the market economy was enabling SOE's to keep some of their profits. Industry quickly replaced agriculture as the leading growth sector in 1980's as large SOE's improved management and efficiency, whereas smaller SOE's were privatised. ...read more.

They were encouraged to invest and manage their land effectively. Pesticides were used and responsibility for system of agriculture was encouraged. Central government also raised the price it paid to farmers for grain and other crops, and by 1980 there was an open market for agriculture produce. The reforms revitalised the rural economy and gave peasants confidence to challenge corrupt and exploitative cadres (local government leaders). However, since that time the Chinese agriculture economy has grown slowly and is beginning to experience food insecurity. This means demand for other land, such as the 'scramble for Africa' is essential to feed the growing population of 21st century China. Rural enterprises were also promoted to set up. For example small cotton production lines sprung up in rural areas and pressure to make profit was enforced by the government. This also was part of China's export led growth idea, where production was to be increased to ensure exports were putting China on the world map and creating trade links. These growths allowed overseas Chinese TNC's to renew their links with China and were promoted to set up in the hugely developing nation of East Asia. However china still needed improved infrastructure and this was only going to be achieved by huge investment over a long time period. As well as infrastructure, China also needed well regulated bank systems as industry was now being reformed. ...read more.

Many people went into private businesses in the 80's as it was seen to pay well if hard work was put into it. An example of this was Mr Haun who left his job as a schoolteacher and became a designer at a local porcelain factory. He employed 20 staff from failing SOE factories. During the early 80's and 90's tens of thousands of intellectuals including teachers left their stable jobs. Chinese private economy exploded during the 1980's and people's opinion towards private entrepreneurs changed as they realised there was nothing wrong with earning a better life through hard work. Within 30 years Private sector had gone from being worth nothing to $10,000,000,000 in 2007; representing 40% in national industrial output - more than public and international sectors and producing around 6 million jobs each year. But without the opening and reform policy, people like Mr Haun would never have been able to do what they were doing. I conclude that a major factor influencing change in the Chinese economy in the past 30 years has been the Open Door policy implemented by Deng Xiaoping. This reform allowed foreign investment and business to bring over modern technology, business management and worldwide trade links to a developing part of the world. In conjunction with other specific government reforms, such as the SEZ's and SOE's, reforms allowed quick economic growth, still allowing time for companies to adjust to the new style of western business. I believe without Deng's new pragmatic modern thinking, China would have been stuck in slow economic development. ?? ?? ?? ?? Lawrence Armitage-Brain ...read more.

The response to how and why the economy of China has changed in the last 30 years is initially good as it outlines policies introduced by Chairman Mao. These policies catalysed the development of China's economy. However, these particularly important ...

The response to how and why the economy of China has changed in the last 30 years is initially good as it outlines policies introduced by Chairman Mao. These policies catalysed the development of China's economy. However, these particularly important policies are not further discussed, which lowers the response, as it highlights that the candidate does not fully appreciate the importance of their role. The response should have only been from 1982 - 2012 (last 30 years), so including pre 1970s was slightly irrelevant. The response only mainly focuses on economic development. However, other aspects of development, such as political, social and environment could be incorporated to give a synoptic nature to the essay. Overall there is an intricate response to the question through Chairman Deng's policies and how they have changed China's economy. The conclusion was excellent and perhaps the most well written part of the essay as it got straight to the point and summarised the whole essay very well.

Analytically there is a good map and pie chart to support the candidate's essay. There is a detailed analysis on the effect of policies on particular businesses such as Shenzhen Energy. There was a satisfactory quantity of statistics, which are vital to have in an A level essay. Statistics show the candidate's understanding of the level of impacts. Long term impacts are also mentioned, although very briefly; 'Within 30 years private sector...2007'. The short term responses are better illustrated. By including more long term impacts, such as what could happen to China by 2020, for example, the candidate would gain substantially more marks, as it shows more depth in research and understanding. Also the fact that China is now an NIC is not mentioned, which is important to include as this economic development status contributes significantly to China's modern economy.