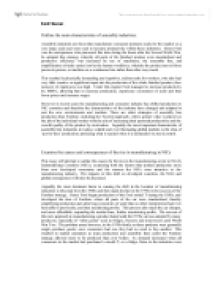 Outline the main characteristics of assembly industries: Assembly industries are those that manufacture consumer products ready for the market on a very large scale and were used to increase productivity within these industries. Henry Ford was the entrepreneur who pioneered this idea during the boom after the Second World War, he adopted this strategy whereby all parts of the finished product were standardised and productive efficiency was increased by use of machinery, the assembly line, and simplification of tasks carried out by the human workforce, whereby the product moved from person to person, or machine on a continuous line rather than other way round. This resulted in physically demanding and repetitive, tedious tasks for workers, who also had very little creative or significant input into the production of the whole finished product, thus turnover of employees was high. Under this regime Ford managed to increase productivity by 1000%, allowing him to increase production, experience economies of scale and thus lower prices and increase wages. However in recent years the manufacturing and consumer industry has shifted production to NIC countries and therefore the characteristics of the industry have changed and adapted to suit the new environments and markets. There are other strategies of assembly line production than Fordism, including the Toyotist approach, where greater value is placed on the job of the individual worker with the aim of increasing their personal productivity and the overall quality of the product by motivation. Arguably the most important characteristic of assembly line industries in todays volatile and ever fluctuating global markets is the idea of 'just-in-time' production; producing what is needed when it is demanded via stock control. ...read more.

The reason behind South Korea's sustained success as an exporting economy of manufactured consumer goods, and its continued rise in economic development was the role of the government and global development and monetary organisations that helped South Korea re-adjust its economy in able to support the investment that it was receiving. High growth was achieved due to the total control over all aspects of the economy by the military governments, who implemented a series of five year plans to aid South Korea to reach its full economic potential. Growth was obtained through the adoption of being an export driven economy, which suited South Korea with its small domestic market and poor natural resources. The policies of the five year plans involved devaluing the Korean Won in order to make it exports cheaper, and thus increase demand in foreign markets, increased interest rates in an attempt to increase consumers and businesses owners capital assets, and consumer confidence. A much more liberal attitude to trade was also adopted, allowing the freer movement of goods and materials, getting rid of import and export duties and taxes. By 1971 this policy had increased exports by 36%, and GNP by 8% per annum, this was further furled by the global growth of lager Multi-National Corporations in tandem with South Koreas growth, which encouraged foreign direct investment to continue flooding into the country. Companies such as Sony, and Nissan both exploited South Koreas resources. South Korea, with its proximity to Japan, an already developed and technologically innovative economy, was an ideal location for international electronics and high-tech industries. ...read more.

They could no longer afford to produce in the Western countries as inflation was too high and higher wages were being demanded just as they had needed desperately to lower costs. There were obvious positive consequences of the increase in the secondary sector for the NICs economies, as it proved to be the start of the growth of the Asian Tiger economies, and has had a knock-on effect with all manufacturing consumer industries based in developed countries who have relocated to NICs and resulted in economic growth and development. However due to the short time scale over which the shift occurred, and the huge pattern that has followed of investment and huge scale production within these nations, many negative effects have been encountered. Pollution, over population and congestion have been major social and environmental costs that most of the NIC economies have had to pay. The positive effect of human development that usually happens as a result of economic development has also not occurred on such a large scale, possibly due to the rate at which these economies have grown, causing huge population growth and urbanisation resulting in decreased quality of life in cities. Rural areas also suffer as they remain involved in agricultural production as they do not attract the MNCs, this causes huge disparities in wealth and equality within the nations. The rapid economic growth as a result of the increase in manufacturing industries in NICs can be seen to be unsustainable, and result in economic collapse, as seen in South Korea, however these economies can re-stabilise and continue a similar but more sustainable route of economic growth. ?? ?? ?? ?? Sarah Bewers ...read more.