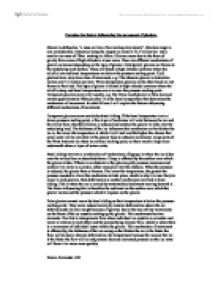 Examine the factors influencing the movement of glaciers.

Examine the factors influencing the movement of glaciers. Glacier is defined as, 'a mass or river of ice moving very slowly'. Glaciers range in size considerably, Antarctica being the largest ice mass at 12.5 million km and a smaller ice mass of 12km existing in Africa. Glaciers move due to the force of gravity from areas of high altitude to lower areas. There are different mechanisms of glacial movement depending on the type of glacier. Cold (polar) glaciers are frozen to the underlying rock surface. These are found in high-latitude locations where the relief is low and basal temperatures are below the pressure melting point. Cold glaciers have very slow rates of movement, e.g. The Meserve glacier in Antarctica moves only 3-4 metres per year. Warm (temperate) glaciers on the other hand are not frozen to their bed. This type of glacier is found in high-altitude locations where the relief is steep and basal temperatures are at or near the pressure melting point. ...read more.

Basal sliding involves a combination of mechanisms. Slippage is where the ice slides over the valley floor as described above. Creep is affected by the surface over which the glacier slides. If there is an obstacle in the glaciers path, pressure increases and enables it to move as a plastic, either around or over the obstacle. When the pressure is reduced, the glacier then re-freezes. The lower the temperature, the greater the pressure needed to allow this mechanism to take place, which is why it is less likely to occur in cold glaciers. Bed deformation is another mechanism involved in basal sliding. This is when the ice is carried by saturated bed sediments moving beneath it. The factor influencing this is therefore the sediment on the surface over which the glacier moves and the pressure which it imposes on the glacier. Polar glaciers cannot move by basal sliding as their temperature is below the pressure melting point. ...read more.

Occasionally some glaciers may surge forward about 100m per day. Factors influencing this movement are a steep gradient and a large input such as a snowfall. This is only likely to occur in temperate glaciers where the basal temperature is relatively high and the ice mass is not frozen to the underlying rock. In conclusion, the velocity of ice flow varies considerably, depending on factors such as the thickness of the ice, the surface over which the glacier is advancing and the amount of meltwater available to lubricate the base of the glacier. Some glaciers creep so slowly that their movement can only be seen over a period of years, whereas other advance at several metres per day. Different factors influence the movement of glaciers depending on the basal temperature of the glacier as this determines the mechanism by which the glacier will move. Glaciers move most rapidly when the gradient is steep, when the ice is fairly thick and when basal temperatures are at or above the pressure melting point. Emma Alexander U63 ...read more.

A very good answer using a lot of key geographical terminology. The answer would be strengthened considerably by incorporating specific examples.
4 stars