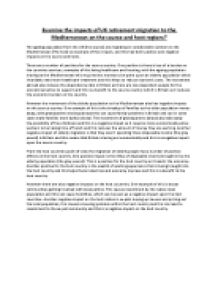 Examine the impacts of UK retirement migration to the Mediterranean on the source and host regions?

﻿Examine the impacts of UK retirement migration to the Mediterranean on the source and host regions? The ageing population from the UK (the source) are migrating in considerable numbers to the Mediterranean (The host) an example of this is Spain, and this had both positive and negative impacts on the source and hosts. There are a number of positives for the source country. One positive is there is less of a burden on the countries services, examples of this being healthcare and housing, with the ageing population moving to the Mediterranean this requires less money to be spent upon an elderly population which invariably need more healthcare treatment and this helps to reduce economic costs. ...read more.

One example of this is the breakup of families as the older population moves away; with grandparents moving abroad this can cause family problems in Britain and can in some cases make families more dysfunctional. The movement of grandparents abroad also take away the possibility of free childcare and this is a negative impact as it requires more economically active workers to be taking time off work and this reduces the amount of money they are earning. Another negative impact of elderly migration is that they aren?t spending there disposable income (the grey pound) ...read more.

A good but somewhat generalised overview of the impact of retirement migration on source and host countries. This answer would be strengthened significantly through the use of specific examples and/or statistics to back up the points being made.
4 stars