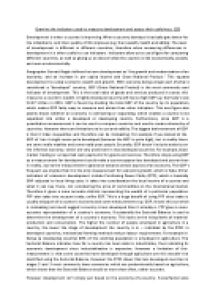 Examine the Indicators used to measure development and assess their usefulness

﻿Examine the indicators used to measure development and assess their usefulness. (25) Development is when a country is improving. When a country develops it basically gets better for the inhabitants, and their quality of life improves (e.g. their wealth, health and safety). The level of development is different in different countries, therefore when measuring differences in development it is often useful to use indicators. Indicators allow us to use a figure for comparing different countries, as well as giving us an idea of what the country is like economically, socially and even environmentally. Geographer Garrett Nagle defines the term development as ?the growth and modernisation of an economy, and an increase in per capita income and Gross National Product.? This equates development to solely economic wealth and growth. With economy being a major part of what is considered a ?developed? country, GDP (Gross National Product) is the most commonly used indicator of development. This is the total value of goods and services produced in a year, this measures a country?s wealth. ...read more.

It takes into consideration the local income of a country and what it can buy there, not considering the price of commodities on the international market. Therefore it gives a more accurate statistic representing the wealth of a particular population. PPP also takes into account trade, unlike GDP. This is a huge benefit of using PPP since trade is usually a big part of a country?s economy and some measurements e.g. GDP, misses this out which is misleading and could suggest a country is less developed than it actually is. PPP gives a more accurate representation of a country?s economy. Occasionally the Sectorial Balance is used to determine the development of a country?s economy. This looks at the rising levels of material production and consumption. The higher the number of people employed in agriculture in a country, the lower the stage of development the country is in ? indicated by the DTM. In developed countries, mechanised farming methods reduce labour requirements. ...read more.

Development can also be measured using demographic data such as infant mortality, life expectancy, natural increase mortality rates and population density. All of which are important when comparing countries. Usually these rates are reliable for depicting the development of a country, for example a country with high mortality rates e.g. South Africa ? 17.2, is likely to have poor health care, diet and sanitation hence why so many people are dying. Therefore reflecting that a high mortality rate shows a country to be less developed. All these measures have limitations when they?re used on their own, since they?re averages therefore they don?t show up elite groups in the population or variations within a country. For example if you looked at the GNI (Gross National Income) of China, it might seem quite developed since it?s very high; except there are still a vast number of the population who are rather impoverished. These measurements also shouldn?t be used on their own because as a country develops, some aspects develop before others, so it might seem that a country?s more developed than it truly is. This is why composite indicators are often used e.g. HDI. ...read more.