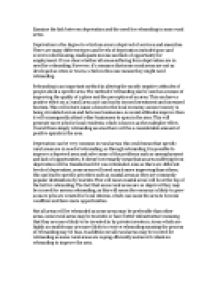 Examine the link between deprivation and the need for rebranding in some rural areas.

﻿Examine the link between deprivation and the need for rebranding in some rural areas. Deprivation is the degree to which an area is deprived of services and amenities. There are many different types and levels of deprivation included poor and overcrowded housing, inadequate income and lack of opportunity for employment. It?s no clear whether all areas suffering from deprivation are in need for rebranding. However, it?s common that some rural areas are not as developed as cities or towns, which in this case means they might need rebranding. ...read more.

As social attitudes improve then it will consequently attract other businesses to open in the area. This will generate more jobs for local residents, which is known as the multiplier effect. Overall from simply rebranding an area there will be a considerable amount of positive spirals in the area. Deprivation can be very common in rural areas; this could mean that specific rural areas are in need of rebranding, as through rebranding it is possible to improve a deprived area and solve some of the problems such as unemployment and lack of opportunities. ...read more.

to grow as more jobs are created for local citizens, which can cause the area to become wealthier and have more opportunities. Not all areas will be rebranded as some areas may be preferable than other areas, some rural areas may be touristic or have better infrastructure meaning that they are more likely to be invested in by private investors. Areas which are highly accessible may are more likely to receive rebranding meaning the process of rebranding may be bias. In addition not all rural areas may be in need for rebranding as some rural areas are coping efficiently and aren?t reliant on rebranding to improve the area. ...read more.