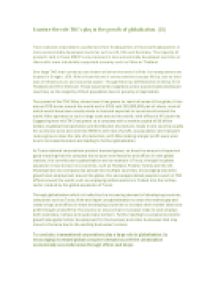 Examine the role TNCs play in the growth of globalization.

﻿Examine the role TNC?s play in the growth of globalization. (15) Trans national corporations usually have their headquarters or financial headquarters in more economically developed countries such as UK, USA and Germany. The majority of products sold in these MEDC?s are produced in less economically developed countries or those with more industrially supported economy such as China or Thailand. One large TNC that?s products are known all other the world is Nike. Its headquarters are located in Oregon, USA. Nike?s factories are in every continent except Africa, due to their lack of infrastructure and industrial power. ...read more.

Nike operates on such a large scale around the world, with offices in 45 countries. Suggesting how this TNC has grown to a company with a market capital of 80 billion dollars, by global transportation and distribution of products, made in one country usually for a very low price and sold into MEDC?s with lost of profit, as population and transport routes grow so does the rate of production, with Nike making a larger profit every year due to increased demand and leading to further globalisation. As Trans-national corporations product demand grows, so does the amount of exported good meaning that the company has to open new factories and offices in new global stations, this ...read more.

Through globalisation which is fuelled by the increasing demand of developing countries, companies such as Tesco, Nike and Apple use globalisation to seize the market gap and create shops and offices in these developing countries to increase their market share and profit though a benefit for the country or area is that it increases trade to and employs both secondary, tertiary and quaternary workers. Further leading to sustained economic growth alongside further development for the business and other businesses that may move to the area due to the existing businesses? success. To conclude, transnational corporations play a large role in globalisation, by encouraging increased global consumer demand as well the urbanisation economically successful areas through offices and shops. ...read more.