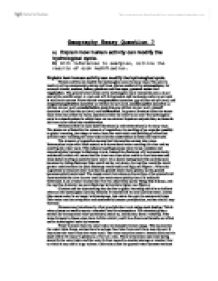 Explain how human activity can modify the hydrological cycle.

This can have various influences on a river basin. Urbanisation leading to deforestation has the biggest affect on the flows of a hydrological cycle. Urbanisation removes vegetation, which means that stem flow, infiltration and evapotranspiration cannot occur. It also reduces infiltration and increases runoff and over ground flow. If vegetation is removed then no interception can occur, which means that no water can be stored which can later evapotranspire, and no water can be taken from the ground in stem flow. It is instead transported to a river straight away. A lot of water reaches the river in a short time so the rising limb is steep, and the lag time is shorter so peak discharge is therefore higher, see Figure 2. This increases the chance of flooding of a river. Impermeable surfaces such as concrete and tarmac cover the ground in cities so water cannot infiltrate slowly. It is run into drains and again reaches the river much more quickly than if it had infiltrated. This has the same affect on the hydrological cycle as the removal of vegetation. With references to examples, outline the results of such modification. I have found examples of the effects that humans have had on certain rivers in the UK. The River Ystwyth in Wales has had flood control systems installed in 1973 due to the spilling of water over the right bank, and the blockage of a lower inlet pipe makes the flows unreliable. ...read more.

Urbanisation also removes trees from an area, which reduces interception, and therefore water reaches the ground quickly. The excess water is run through drains and is deposited straight into the river reducing the water travel time by hours or even days. There are large amounts of ground water extraction for the Public Water Supply, which would reduce the volume of water in the river, and the pervious chalk landscape also allows water to infiltrate outside of the urbanised areas of the catchment area, and so this would help increase the lag time between peak rainfall and peak discharge, so this river, although it would be effected by humans, would not suffer and flood due to human impact. The River Itchen has human influences such as ground water abstractions and cress farms which although originally had little effect on the river are now becoming increasing impact on the river regime as the river depends predominantly on base flow, the addition of water to a river from the water table. The extraction of water from the water table means that it becomes lower each year and so less water is added and therefore river discharge decreases. The catchment is 90% chalk with mainly arable land and a few small settlements, so these would have little effect on the river cycle, and the hugely permeable chalk would allow a lot of infiltration which would mean the water was travelling by through flow which is much slower than surface runoff, and so would increase lag time. ...read more.