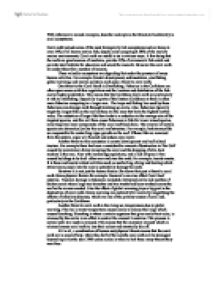 With reference to named examples, describe and explain the threats to biodiversity in coral ecosystems. Coral reefs include some of the most biologically rich ecosystems and are home to over 25% of all known marine fish, despite only occupying 0.18% of the world's marine environments. Coral reefs are useful to us in various ways. A few being that the reefs are good sources of medicine, provide 25% of commercial fish catch and provide ideal habitats for education and scientific research. However the coral reefs are under threat for a number of reasons. These valuable ecosystems are degrading fast under the pressure of many human activities. ...read more.

The removal of certain species can dramatically alter the coral reef structure. For example, herbivorous fish are responsible for controlling algae growth on the reef. If these fish are removed from the system, algae will flourish and reduce coral cover. Another threat to this ecosystem is coastal development and reef related tourism. For example there has been a considerable amount of destruction in The Gulf caused by recreational divers trampling the coral and the dropping of dive-boat anchors in the area. Also with increasing populations, and a lack of space it has caused buildings to be built often near and over the reefs. For example, tourist resorts. ...read more.

Another threat to coral reefs is the rising sea temperatures due to global warming. The rise in water temperature causes corals to release their alga which causes bleaching. Bleaching is when a certain organism that give corals their color, is released by the corals in an effort to control the amount it contains. This process is normal until too much is released. This means that the excessive amount which is released causes coral reefs to lose their colour and eventually die off. All in all, a combination of human and physical threats means that the coral reefs are in need of help. More than half of the world's coral reefs will be damaged beyond repair by the year 2100 unless action is taken to halt these many threats they now face. ...read more.