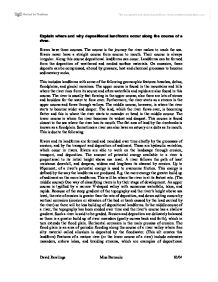 Explain where and why depositional landforms occur along the course of a river.

Explain where and why depositional landforms occur along the course of a river. Rivers have three courses. The course is the journey the river makes to reach the sea. Rivers never have a straight course from source to mouth. Their course is always irregular. Along this course depositional landforms can occur. Landforms can be formed from the deposition of weathered and eroded surface materials. On occasion, these deposits can be compressed, altered by pressure, heat and chemical processes to become sedimentary rocks. This includes landforms with some of the following geomorphic features: beaches, deltas, floodplains, and glacial moraines. The upper course is found in the mountains and hills where the river rises from its source and often waterfalls and rapids are also found in this course. The river is usually fast flowing in the upper course; also there are lots of stones and boulders for the water to flow over. Furthermore, the river starts as a stream in the upper course and flows through valleys. ...read more.

A river follows the path of least resistance downhill, and deepens, widens and lengthens its channel by erosion. Up to 95percent; of a river's potential energy is used to overcome friction. This energy is defined by the way the landforms are produced. E.g. the more energy the greater build up of sediment so the more landforms. This will be where the river is at its fastest rate. (The middle course) One way of classifying rivers is by their stage of development. An upper course is typified by a narrow V-shaped valley with numerous waterfalls, lakes, and rapids. Because of the steep gradient of the topography and the river's height above sea level, the rate of erosion is greater than the rate of deposition, and down cutting occurs by vertical corrasion (erosion or abrasion of the bed or bank caused by the load carried by the river) so there will be less build up of depositional landforms. ...read more.

In the middle section of a river, the valley is characterized by broad flood plains, at least as wide as the amplitude of meanders. The valley sides are visited only infrequently by the slowly shifting channels of the streams. As the flood plain develops, oxbow lakes become numerous. Oxbow lakes are crescent shaped lakes formed in an abandoned meander river bend by a meander cutoff. Oxbow lakes are lakes or ponds found in association with river channels. When a river channel becomes obstructed by silt and debris, the river will often cut a new channel around the obstruction. With time the obstructed area may become completely cut off from the river and begin developing as a lake. Over time an oxbow lake may become filled with organic material and be transformed into a marsh. In conclusion hydraulic variables and physical variables (relief/climate) aid the development of depositional landforms along a river. The more turbulent a river is, the more it will occur. The turbulence differentiates through the three courses; upper, middle and lower. This results in different landforms occurring at different stages. David Rawlings Miss Barnacle 10/04 ...read more.

Response to Question: Despite giving lots of detailed information on the general topic area of the riverÃ¢â‚¬â„¢s course, the student does not place enough emphasis on the main focus of the question Ã¢â‚¬â€œ depositional landforms. Some good points are made ...

Response to Question: Despite giving lots of detailed information on the general topic area of the riverÃ¢â‚¬â„¢s course, the student does not place enough emphasis on the main focus of the question Ã¢â‚¬â€œ depositional landforms. Some good points are made referring to how the location along the course of the river affects the types of deposition that occur (such as Ã¢â‚¬Å“Because of the steep gradient of the topography and the riverÃ¢â‚¬â„¢s height above sea level, the rate of erosion is greater than the rate of deposition, and down cutting occurs by vertical corrasion Ã¢â‚¬Â¦so there will be less build up of depositional landforms.Ã¢â‚¬Â). However more detail needs to be focussed on these points, and less, or none, on erosional landforms such as waterfalls and v-shaped valleys.

Level of Analysis: This being an Ã¢â‚¬ËœexplainÃ¢â‚¬â„¢ type question, there is no call for evaluative points. However, the student could have added in examples of locations where the landforms are known to occur, for example the Ganges Delta. This would make it clear that the points are supported by evidence.

Quality of Writing: The structure of this essay is good in that it follows the conventions of an introduction (that introduces us to the idea that rivers differ along their course) and a conclusion (which sums up the main ideas). Lots of technical terms are used (e.g. corrosion, abrasion, delta), and this strengthens the essay as it suggests to the reader that the student knows the topic well. There are no problems with spelling or grammar.