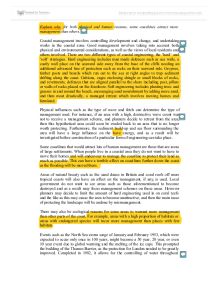 Explain why, for both physical and human reasons, some coastlines attract more management than others.

Explain why, for both physical and human reasons, some coastlines attract more management than others. Coastal management involves controlling development and change, and undertaking works in the coastal zone. Good management involves taking into account both physical and environmental considerations, as well as the views of local residents and others involved. There are two different types of coastal engineering, the 'hard' and 'soft' strategies. Hard engineering includes man made defences such as sea walls, a costly wall place on the seaward side away from the base of the cliffs needing an additional advanced line of protection such as rocks on their seaward side. Groynes, timber posts and boards which run out to the sea at right angles to trap sediment drifting along the coast. Gabions, cages enclosing shingle or small blocks of rocks, and revetments, defences that are aligned parallel to the shore including post, pillars or walls of rocks placed on the foreshore. Soft engineering includes planting trees and grasses in and around the beach, encouraging sand nourishment by adding more sand, and then most drastically, a managed retreat which involves moving homes and farmland. Physical influences such as the type of wave and fetch can determine the type of management used. For instance, if an area with a high, destructive wave count was not to receive a management scheme, and planners decide to retreat from the area, then this hypothetical area could soon be eroded back to an area that is no longer worth protecting. ...read more.

This is one case where management was needed to protect the people and property of London. If this were not constructed, areas such as Lambeth, Newham, Southwark and Westminster would be under regular threat of flooding. Future danger to people, property and land does not come only from direct sea flooding. The formation of tsunamis after earthquakes is due to tectonics. Areas at risk from strong earthquake shocks are well known such as Japan, which experienced a great tragedy when a tsunami hit in 1993, but earthquake events are impossible to predict. Some parts of the UK coastline have long attracted people; they have also attracted human interference. The only reason that coastal erosion becomes a problem is when human development is involved. Farmland is seen to be worthless in the eyes of the government, even though people's livelihoods depend upon it. Farmers on the Holderness coast receive no compensation for the loss of farmland due to coastal management further up the coastline. The land is less valuable and the cost of management cannot be justified. Where the management is being carried out is in areas of tourism and high population. The areas need the money from tourism to retain their state of economic wealth so money from the government is poured into the area. ...read more.

A high proportion of its land is at or around sea level. The flat islands are ideal for rice growing, explaining why there are 40 million people living in the area. However, with previous storm surges drowning 40,000 people, killing crops and animals, coastal defences are needed. Unfortunately with Bangladesh being an LEDC it just does not have the funding and has to cope merely with soft engineering strategies of planting Mangrove trees. Other particularly densely populated parts of the world are at risk; regions like the Nile in Egypt, and the Ganges in Bangladesh. These are LEDC's who are unable to afford the kind of coastal protection they wish, however the Maas in the Netherlands already has many coastal defences in place showing great effectiveness. Coastlines attract more management than others depending on a variety of variables; the human influence on the area, the affect that waves have on the area and the environmental significance of the area. If, in one certain area, one of these criteria does not have the same level of importance as another area, then the latter should be favoured. This may not always be the case, however, as certain parts of the coast have a far greater influence on governmental policy than others, and if the area can afford to have a management scheme in place, then this throws the theory that coastlines are managed simply on their state of being. ...read more.

This is a reasonable attempt at this question. It contains relevant ideas and some useful case study information. Its structure could be improved. The author could have made more frequent use of key terms from the questions such as "physical" and "human". A crucial aspect of the question is the need to compare places. In several parts of the question the author has missed the opportunity to draw these comparisons.