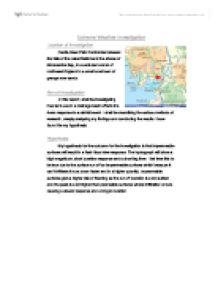 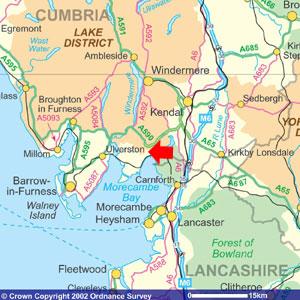 Castle Head Field Centre lies between the fells of the Lake District and the shores of Morecambe Bay, in a secluded corner of northwest England in a small rural town of grange over sands.

In this report I shall be investigating how land-use in a drainage basin affects the rivers response to a rainfall event. I shall be describing the various methods of research, deeply analysing my findings and concluding the results I have found the my hypothesis.

The investigation was based around four different surface types representing drainage basins, to test the response of each surface. The first surface was bare earth witch consisted of various materials including rocks and soil. There was also a concrete surface, which represented an urban environment. Also grazed and ungrazed pastured which consisted of both soil and clay. The grazed pasture was more compact and disturbed then the ungrazed which could represent a differ in the results. Each plot consisted of inclined surfaces of a particular ‘land-use’. A group of students were assigned to each plot.

In the investigation we were simulating a rainfall event onto the various surfaces in which would represent that of a real event. To make the rainfall itself we had to use a length of guttering (the same size as the plots) with lots of pierced holes throughout. We began the experiment by placing the guttering directly above each plots and then pouring water into the guttering thus making rainfall. The water was poured over a certain time period – five litres every thirty seconds (until it reached one minute) with a delivery starting time of zero seconds. We then, at a total time of three hundred seconds poured a further ten litres of water over thirty seconds.

As we were testing the lag time from the rainfall event to ‘the river’ we had to collect and measure the amount of water that came out at the lowest end. By doing so we had to use another length of guttering this time with just one large hole at one of the ends. The guttering was then placed at the lower end of the inclined surface which itself was tilted to the end with the hole so the water could flow out. Water was collected by measuring just directly beneath the holes approximately every 20 seconds. The water was then recorded down.

During the investigation we recorded our measurements down for the amount of rainfall collected at the bottom of the inclined surfaces. We then used the results to create a hydrograph. A hydrograph is a form of chart that we use to analyse the overall lag time of the investigation. To draw a hydrograph you need to have the X-axis as your time (seconds in this instance) and the Y-axis as the flow of drainage (ml). You then plot each reading every twenty as we read measurements every twenty seconds. Then you join each plot together using a straight line. In addition, we also added the amount of water poured on to each surface to the hydrograph. 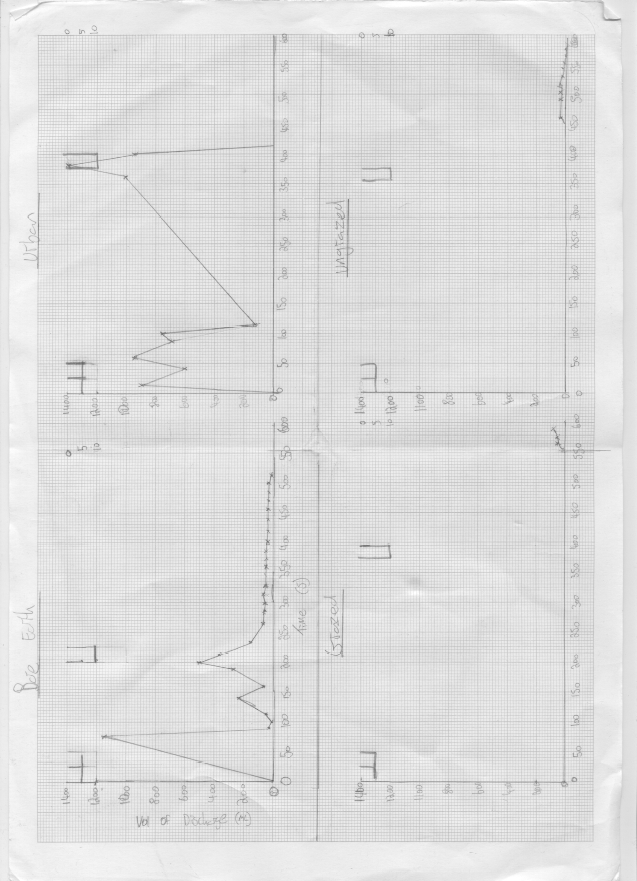 With bare earth you can see that the surface run-off was quite sudden with water coming out virtually straight away, and after just eighty seconds the discharge reached its peak of just below 1,200 ml. Both the rising and falling limbs of all three peaks are also quite sudden. The urban surface was quite different with three sudden peaks in particular the first rising limb. Further into the investigation there is quite a slow rising peak but reaching the highest peak discharge of just below 1,400 ml.  The grazed and ungrazed surfaces are quite similar to each other as the lag time on both is very long. Also, the overall discharge was especially low with the highest peak for both being only 100ml. I thought that the urban surface results were representative to that of a real event as many urbanised areas can be flooded easily as no infiltration can be achieved due to concrete and buildings. I thought that the grazed and ungrazed surfaces were also quite representative as soil and grass is very easy to infiltrate and acts like a sponge soaking up water giving minimum discharge.

At the beginning of the investigation my hypothesis was that impermeable surfaces would result in a flash flood river response. I believe that this is true due to the outcome of the investigation, with the peak of the urban surface results having both high and fast limbs. By comparing the urban surface results to others like grazed and bare earth we support the hypothesis even further.

If I were to do this investigation again then I would alter a few things. First of all, I would use bigger measuring cylinders to ensure that not much water is lost when swapping cylinders. Secondly, I would make sure the water output into the guttering was steadier to make the results more reliable. Finally, I would use more surface types to ensure the hypothesis is correct.