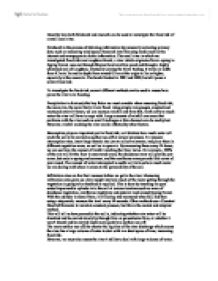 Flood risk of a local river

Describe how both fieldwork and research can be used to investigate the flood risk of a small local river. Fieldwork is the process of obtaining information by personally collecting primary data, such as measuring wind speed. Research involves using media such as the internet and newspapers to obtain information. The small river in which we investigated flood risk was Loughton Brook, a river which originates from a spring in Epping Forest, runs out through Staples Road overflow pond and through a highly urbanised area of Loughton, eventually joining the River Roding. It varies in width from 0.7m to 2m and in depth from around 0.7cm at the origin to 2m or higher, especially at the reservoir. The brook flooded in 1987 and 2000, but still poses a severe flood risk. To investigate the flood risk, several different methods can be used to assess how prone the river is to flooding. Precipitation is obviously the key factor we must consider when assessing flood risk; the more rain, the more likely it is to flood. ...read more.

Other methods use a Constant Head Infiltrometer to maintain constant pressure, but this is the easiest and simplest method. This will tell us how permeable the soil is, indicating whether rain water will be absorbed and be carried slowly by through flow or groundwater flow, or whether it won't absorb and be carried much more quickly as surface run-off. The more surface run-off, the shorter the lag time of the river discharge which means the river has a large volume of water to deal with in a short space of time, increasing flood risk. However, we must also assess the river's ability to deal with large volumes of water. To do this, we have to find, amongst other things, the cross-sectional area of the river. Using a tape measure and a 1m rule, we can measure the width of the river and then measure the depth every 10cm across, creating a rough guide to the shape of the river, and therefore be able to see how much water the river can hold before it bursts its banks. ...read more.

Using this information, we can already see why there may be a flood risk at certain times. In conjunction with this, looking at previous flood events is also a helpful resource. The flood of 2000 happened in summer, an example of how sunny warm conditions can make increase flood risk if it was to rain. Ordinance surveys are useful after having taking measurements for interception. We can see the difference in water intercepted in deciduous areas and coniferous areas, as well as the contrast between woodland and open air, so an OS map showing how much land is covered by which type of vegetation, if any, will give us an indication of how much water is lost through interception around the whole catchment. A final method would be to look at how the brook is being managed; for example, in Loughton brook the grilles are cleared once every month, and repairs are carried out on a regular basis. If the local council or the body in charge do not carry out repairs and maintain the river due to lack of money or whatever reason, flood risk increases immediately, regardless of any other factors. ...read more.